Dizzy: The Life and Times of John Birks Gillespie

By DAVID RICKERT
August 9, 2005
Sign in to view read count 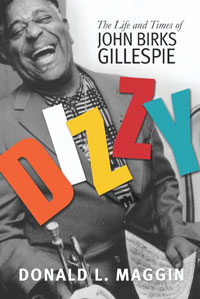 Dizzy Gillespie towers over the history of jazz, a true giant among his peers. Over a lengthy and successful career he spearheaded two major jazz movements and played with virtually everyone of note. Thus a biography of his life at times seems like a history of the music. Dizzy, Donald Maggin's excellent new biography of the trumpeter examines the career of one of jazz's greatest artists and one of the best musicians of the twentieth century.

The lion's share of Dizzy chronicles the forties and fifties, and rightly so, for these were landmark years for jazz where Gillespie played a large role. Maggin provides a fascinating account of the development of bebop at Minton's and other clubs were Thelonious Monk, Charlie Christian, and of course Charlie Parker played a large part in develop a new language for jazz that broke down the constraints of the Swing Era idioms. Maggin details Gillespie's struggles to find a home for his harmonic adventures in the home of swing bands until he hooked up with Billy Eckstine, a bandleader who welcomed the new developments. Along the way we get amusing anecdotes, such as the time Parker came by Dizzy's place at a late hour to play him a new tune. Lorraine, Dizzy's wife, didn't want Parker inside, so Dizzy transcribed the tune as Parker played it on the other side of the door.

Maggin also makes a case for Dizzy as an excellent entertainer, even though his clowning caused some to criticize him for cheapening the music. Yet his extroverted tendencies made him a great ambassador and spokesman, and the chronicles of his State Department tours show an artist willing to embrace what other cultures had to offer. His fascination with Afro-Cuban rhythms led him to incorporate it into his music, even in a big band that he formed long after most of them had folded due to financial troubles. His experiments with Afro-Cuban music not only led to some fantastic music, but also paved the way for a fusion that continues to this day.

Unfortunately, Maggin's book slips a little in the latter third, which covers the sixties and beyond, lean years for jazz. There's not too much to report in the way of interesting history, and often seems like a laundry list of the people and places Dizzy encountered during this time. He continued to produce worthwhile music, but there's no doubt that Gillespie's best known years were behind him.

Maggin wisely provides a context for Dizzy's music that provides fascinating reading. He gives us detailed information on the development of the swing music craze, the recording ban, and the advent of rock and roll and outlines the impact it had on jazz. As a result, we not only get a detail look at Dizzy's life, but also the circumstances which led him to create the music that he did. As an outline of the cultural forces that have shaped jazz, at least from the thirties onward, Maggin's book excels.

Dizzy is a fast-paced read filled with interesting information that comes from a man who had contact with Dizzy during the last few decades of his life. It is a labor of love from someone who intimately knows the music and isn't afraid to champion his favorite recordings while criticizing others for not being as good as they could have been. There's no discography included, but surely one would take up several pages of an already thorough book. Dizzy was that important to jazz, and Maggin has provided us with a fantastic look at his life.

A companion CD with liner notes written by Maggin and tracks personally selected by him is also available from Verve.