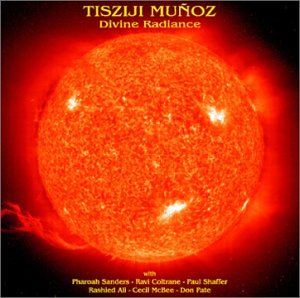 Quick! Name a shredding electric guitarist heavily influenced by late-period John Coltrane... If you said Sonny Sharrock, you're probably not alone; Sharrock built a career out of translating the turbo-charged tenor saxophone sounds of Coltrane, Albert Ayler and other first-generation avant-garde players to the guitar. Few know, however, that Sharrock, who seems peerless, has company in this arena.

When the sextet led by guitarist Tisziji Muñoz, and featuring Coltrane collaborators Pharoah Sanders (who also worked with Sharrock) and Rashied Ali, charged into "Initiation by Fire" at the Village Underground last month, the first thing I thought of was Sharrock's Ask the Ages. Everything from the instrumentation to the highly melodic quality of the written music to the thicket-like counterpoint of Muñoz and Sanders recalled that seminal release. Listening to Divine Radiance, I still think of Sharrock, but I notice that these two players use melody in very different ways. While Sharrock famously tried (very successfully, e.g. on "Devils Doll Baby" from 1986's Guitar ) to "find a way for ... terror and ... beauty to live together in one song," Muñoz' performances tend to be either terrible (in the most ironically positive sense) or beautiful.

The most energetic and effective track, "Divine Radiance," a marathon collective improvisation in the general mold of Trane's "Ascension," undoubtedly falls into the latter category. Here, Sanders and fellow tenor man Ravi Coltrane alternate between hoarse brays and molten runs that clearly evoke the elder Coltrane, while Muñoz matches them shard for shard. The guitarist has an impressive range of sounds at his disposal; he shuffles pyrotechnic upper-register somersaults, blues-metal chunks that recall Vernon Reid, and ambient string scrapes. In total contrast to "Radiance" is "Fatherhood," a gem-like guitar/synth duet featuring Paul Shaffer, who uses a plush, vibraphone-like tone. When Muñoz and Shaffer initiated this piece at the Underground, I was totally taken aback by its unabashed lushness. On record, Muñoz' ringing notes float over the cloud of Shaffer's New Age atmospheres, and if one can abide the considerably dated sound of the synth, the piece is quite affecting.

While the performances on Divine Radiance do seem a bit one-dimensional in comparison with Sonny Sharrock's best work, Tisziji Muñoz's latest is, on its own terms, an extremely well-played (Ali in particular is in fine, bruising form) example of post-Coltrane free jazz that fans of this style will certainly enjoy.