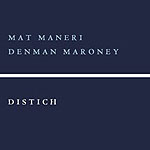 Distich is a duo testing the limitations of its instrumentation. Mat Maneri brings his 5-string viola to bear and Denman Maroney his piano, on music that to all intents and purposes is concerned largely with new sonic possibilities.

This is especially pertinent in view of what might be called Maroney's extended use of the piano, through which he utilizes other elements of the instrument apart from the keyboard itself. The end result is a program of music as soundscape, in the best sense of the term, as much as it is the product of the two musicians interacting. The balance they consistently manage to strike between the two is remarkable.

It could be argued that the devil there undoubtedly is in this music lies in the detail, and with that in mind the fact that it's been recorded with such clarity and precision is only a blessing. On the title track even the tiniest nuance has been captured, and the effect of this is a truly intimate portrait of precisely where the music is going. By the same token the initially disorientating effect of "Bicinium is not so much resolved as it is incorporated into a greater whole, like one of the pieces in a mosaic of sound the full life of which is conveyed through the sonic clarity.

"Brace offers up something of a snapshot of how the duo works. Their in-the-moment intuition comes out here in the way the two indulge in an out-of-pitch exchange, the music seeming to move stealthily towards some ever indeterminate point, if that's possible. The effect of it is a kind of opposite to musical conservatism, especially as what music might be, as opposed to what it already is—this seems like an abiding preoccupation. Not even the fact that this piece enters the realm of a kind of warped formalism alters that impression, especially as its development thwarts expectations of even the closest, most diligent listening.

In this setting a title like "Couplet is only too apt. In contrast with a lot of the music, a form of hyperactivity pervades the piece, both musicians seemingly intent on staking out their own musical space at the same time as they are servants of the duo's bigger needs. That might sound like a paradox, but it could be argued that it's a paradox which lies at the very heart of music like this. When the results are as stimulating as they are here, the issue seems irrelevant anyway.