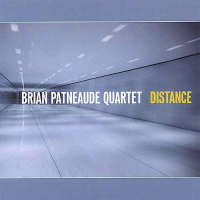 In almost no time at all, 31-year-old saxophonist Brian Patneaude has become the first-call king of Albany, NY's buzzing jazz scene. Variations, his quartet's excellent 2003 debut, instantly established him as one of the mainstream's hottest new tenors; he also retains a chair in the renowned Empire Jazz Orchestra, plays salsa and merengue with Alex Torres and his Latin Orchestra and blues with the Tom Healey Band, and makes experimental sounds with the DJ-plus-live instruments project Nouveau Chill. On top of all this, he still finds time to sit in with other local players and to oversee www.albanyjazz.com, a site dedicated to jazz in the state's Capital Region. And most of us feel like we've achieved something if we've managed to grab a shower and still make it to work on time. Whew.

For this, the quartet's fervently anticipated sophomore release, the crack regular lineup of Patneaude, bassist Ryan Lukas, guitarist George Muscatello, and drummer Danny Whelchel is augmented by guest keyboardist Dave Payette, who contributes Fender Rhodes to three tracks. While the band's previous effort was marked by Patneaude's exceptional blend of Coltrane-ish, searching lines and Lovano-esque earthiness, Distance sees him taking new chances, unwilling to accept the dangerous proposition of being branded yet another imitator. For most of the album, Patneaude downplays his edgier Trane influences, instead choosing a path that occasionally veers uncomfortably close to smooth territory but still holds on to enough Lovano-style soul to keep it real (witness the deep ballad "Alone, with its yearning, ascending melody).

Muscatello is both the band's secret weapon and Patneaude's perfect foil. The guitarist's sinewy lines are often compared to that of Pat Martino, but in his glassy chords one can also hear the translucent chops of Grant Green. On the pressure-cooker bossa nova opener, "Change, his slinky, uncoiling solo even threatens to steal the tune from the leader.

"Red, another highlight, commences with an addictive, insistent bass line from Lukas, picking up a clipped, stuttering snare pattern from Whelchel and a recurring motif from Patneaude before collapsing into the complex mathematics of Muscatello's twisted navigations; the tune also features a wild, effects-enhanced solo by Patneaude that recalls electric-era Miles.

While the comparatively lush production of Distance lacks the intimate, organic punch of Variations, it's no coincidence that most of the names of the tunes here—"Change, "Inspiration, "Unending, even the title track—point to this album as being one of necessary evolution, of Patneaude continuing to grow as a composer, leader, and musician.