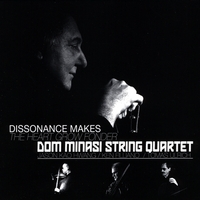 Although the titles of this set of miniature concerti are admittedly quirky it is this very character that gives the music of the Dom Minasi String Quartet's Dissonance Makes the Heart Grow Fonder startling precision as well as emotion. Often one or the other characteristic is largely absent from music of this nature: that which has been composed and improvised upon as well. Did the Brandenburg Concertos not have bubbling emotion? And yet were they not so mathematically precise. Or for that matter were not Wolfgang Mozart's concerti just as precise and emotional as well? The questions of precision and emotion are of paramount significance here as Minasi reaches beyond the heart and deep into his musician's soul to bring the melodies to life.

Beautiful melodies they are, swaying with gravitas and depth, as the title, "Dissonance Makes the Heart Grow Fonder" suggests, and do so out of a sense of the separateness of being. Sometimes the music is like tortured sighs that come in wave after wave, touching the very depth of the mind's ear. "The Dark Side" is just that kind of piece. It is far from the noir piece that the title suggests, but rather a journey into the pain of heart-soft thorns that seem to prick the soul—yes, that very invisible entity that seems to feel the brunt of most of this music. "Green! Green! They're Green!" is as puckish and whimsical as it is creepy and is resolved into a sense of momentary calm only because it ends on a dominant note—abruptly. "Slow Dance in the Bottomless Pit" might just as well be a corollary to both "The Pasadena Two Step" for it echoes with a similar rhythm initially and toward the end, as well as suggests the same fearful encounter that "Green! Green! They're Green!" does.

What masterful compositions that unfold with such dexterity at the hands of musicians who appear to inhabit the very soul of the material that they play! Minasi has always had a penchant for pushing the outer limits of his instrument, much like Cecil Taylor does the piano. Here he does make his guitar sound like a viola, played pizzicato. If anyone can warp the melody while holding fast to grave emotions it is Ken Filiano, who infuses his arco playing with a majestic grumble, especially on "Dissonance Makes the Heart Grow Fonder." Jason Kao Hwang's violin holds up the soprano voice of these magnificent concerti with dazzling virtuosity and grace. Tomas Ulrich's cello maintains the graceful deep tones of the music throughout, allowing Filiano, Kao Hwang and, of course, Minasi to soar or fluttering wings every time the music demands it of them.

This is a magnificent album, memorable not just for the veracity of its music, but also for the utter skill with which it is interpreted and played. Bravo, Minasi...Encore.