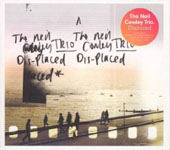 The short story of Neil Cowley is that he was a child prodigy performing Shostakovich at the age of ten, became enormously successful in the pop, soul and funk world, and then emerged from an electronics-induced existential crisis to lead a predominately acoustic, and very hot jazz trio.

If one scored points for pure energy, then Cowley would win by a mile, but Displaced has much more going for it than that. However, comparisons do help relay information and Cowley's style would put him at the far opposite corner of the piano-playing universe than someone like ECM's Tord Gustavsen.

Classically trained players, if they turn to jazz, usually keep touch as part of their arsenal—think of the two Stefanos, Bollani and Battaglia, on their respective records Piano Solo (ECM, 2007) and Re: Pasolini (ECM, 2007)). This is not to say that Cowley is a banger, but rather that he has things other than subtle touch on his mind.

The tone of Displaced is established immediately by the first two tracks, "Little Secrets" and "How Do We Catch Up" (which reappears in a remix version as the last track). Both feature very strong left hand vamps, the first played in unison by bassist Richard Sadler from the outset, while the second is taken over by the bass from the piano. Both tracks can get so thick with double-handed chords, the splashing cymbals of Evan Jenkins with the bass line mixed inside of it all, that one might feel like drowning, except that Cowley knows exactly when to let up and thin it out, only to build again.

The effect is like being picked up by a wave and having it crash over you as it carries you to shore, and as much fun. However, the dark and romantic title cut immediately follows, allowing some aural breathing room, before it, too, swells to an intense climax before receding.

The rest of the album is like this, with an extremely tight band producing a sound that is dense and moving in many directions at once. One moment your attention will be pulled to Cowley, then next to Sadler only to end up on Jenkins, until you realize that the sound enmeshing you is that of the total trio.

Of course, there will be listeners who will long for more variety in the overall sound and the harmony or emotional pitches reached, and perhaps this cannot be helped with a musical personality as strong as Cowley's. This, however, is a small quibble when presented with such a fresh, though insistent, new voice and conception.