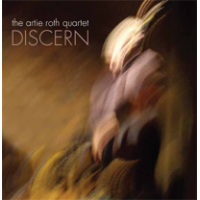 It has been quite a while since we have heard from bassist Artie Roth, as almost ten years have elapsed since Parallels. 2013 saw the current quartet on Currently Experiencing, clips of which can be found here. Discern, this quartet's latest offering is a dark, moody and powerful set of compositions brought to life by Roth and band members reedman Mike Filice, guitarist Geoff Young and drummer Anthony Michelli.

The quartet plays as a single unit, creating a singular sound and vibe which is explored in different ways over the course of the record. The sound stage is wide and deep, the hour is late and there is a hint of danger in the air. Filice weaves mournful lines with his tenor and soprano saxophones, as well as a very spooky bass clarinet (a la Gebhard Ullmann) on "Still Hear."

Young is arguably the glue which holds the band's sound together. He is quite familiar with this mood, as Paul Olson describes for his trio recording, In Between: ..."a dark, cold Ontario night where blizzards loom and wolves prowl just beyond the campfire." His effects, rich in sustain and reverb, create a curtain behind the band, or a fog which surrounds the band. Adding to this role are his solos, which at times in line and sound echo John Abercrombie (a very high compliment!).

Michelli's drumming is tough, hard and driving, which when paired with Roth's rumbling, propulsive bass, raises the entire band practically off the ground. The quartet is almost a machine in its power, but colored by strong emotions which are almost unchecked.

The album is paced very nicely, with an emotional arc peaking in intensity with "Something That Is Lost," which by itself is the sum of everything this quartet is about. Beginning with a hard and crushing bass and drum intro that reminds of Ullmann's Basement Research group, the theme is played by Filice and Young in unison, and then the band takes off. Over a bubbling and roiling bottom, Young fills the air with menacing chords and effects around which Filice spins almost spooky lines. The effect is electrifying and not a little bit terrifying. A center section of only Roth and Michelli ensues that initially drops the energy, but they gradually bring it back up. Young then adds his spacey chords and sounds, leading to an intense solo over the wall of sound created by Roth and Michelli. This is a very, very powerful track.

The upward arc to this peak begins with "The Compromise Blues," which is more blues-ish than one with a strict harmonic/melodic structure. This opening track sets the mood in that the color projected is more noir-blue than sky-blue. Filice's understated, but extremely intense solo exudes that late night, foggy-air-with-a-street-light feeling. Young's thick, overdriven sound is perfect in response, as the piece cooks on a low, simmering heat.

The downward arc from the peak ends with "Forevery," with its very pretty opening tune, which nevertheless has the same overtones of darkness and danger. The middle section is more atmospheric with Young's guitar echoed figures providing the backdrop for Filice's mournful horn. A wall of sound is created, demonstrating the how completely the group meshes.

Wherever this vibe is coming from, Roth, with his compositions and arrangements has created a unique language which his band mates completely understand and possess. This is Roth's project, but this music is all about the band's group personality. Evocative, highly emotional, abstract and yet completely accessible, intense without becoming overbearing, Discern creates a distinct atmosphere, enveloping and submerging the listener.

Just about a perfect record.

The Compromise Blue; Still Hear; So Much More Or Less; Something That Is Lost; Spinning Machine; Re: Discovering The Wheel; Dove Tales; Forevery.