By C. MICHAEL BAILEY
October 11, 2015
Sign in to view read count
Track review of "I'd Rather Go Blind" 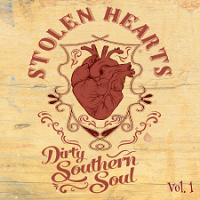 Multi-instrumentalists Pam Taylor and Robert Johnson, Jr. tacitly make up the durable blues-R&B-soul duo Stolen Hearts. Piedmont born and bred, the two fell in love and decided to make music together. This fortuitous coupling of talent has led to a serious survey of American music aptly called Dirty Southern Soul. The two trade duties singing, both with that authentic Southern grit one hopes to hear in this curious combination of blues, jazz, R&B, rock 'n' roll, soul and funk. Both principals play wicked guitars. Joining with various musicians, Dirty Southern Soul is a mixed bag in the best sense.

The blood register on this recording is a searing cover of "I'd Rather Go Blind" that closes the disc. Clocking in at nine minutes, Stolen Hearts mix Muscle Shoals, Memphis, Philadelphia, and Detroit into a heady roux seasoned with Mike Taylor's throaty tenor saxophone swimming in James Pace's Hammond stew. Taylor sings with a southern curl in her voice, sweet as spring. She trades solos with Johnson, but it is Mike Taylor who quickens the flesh of this standard. Pace injects a shot of church via Jimmy Smith into music almost too rich to eat. This music still exists.