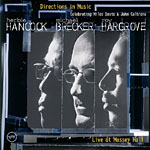 Herbie and Wayne'Wayne and Herbie...

Herbie Hancock and Wayne Shorter are two of the dwindling number of true giants of Jazz. Any new release by them should be greeted with interest if not wonder. In this odd Summer of 2002, both men have released live recordings using an acoustic format with the same rhythm section of John Patitucci and Brian Blade. Footprints Live is Shorter's first headliner disc since 1994's Highlife (Verve 9224) and his first acoustic disc since 1967's Schizophrenia (Blue Note 32096). Herbie Hancock, on the other hand, has been releasing all manner of music in the last number of years, including the acoustically strange Gershwin's World (Verve 557797, 1998) and the retro-electric Return of the Headhunters (Verve 539028, 1998). Directions in Music is Hancock's first acoustic offering with a fixed group since his 1997 duet with Shorter, 1 + 1 (Verve 537564).

Recorded in the hallowed Massey Hall in Toronto, Directions In Music is touted as an event celebrating the 75th birthdays of Miles Davis and John Coltrane. A good deal of press was expended on the promotion of this disc. Much of that press focussed on Hancock's approach in re-tooling some timeworn standards. For his excursion, Hancock brought on board Michael Brecker and Roy Hargrove. Both men are compelling choices, to be sure. Hargrove might be perceived as being in a bit over his head, but he does contribute a heartfelt tribute to Miles in "The Poet," an exquisite ballad that honors the Prince of Darkness when he was not so dark. Brecker offers his Trane praise in the disc closer "D Trane". "D Trane" begins with an extended bass solo from Patitucci, much in the same guise favored by Coltrane and bassist Jimmy Garrison when introducing the late readings of "My Favorite Things." The progression is complex and hard swinging. Brecker is breathtaking. His horn a cappella "Naima" is a clinic on the state of the tenor, 2002.

What I feel is the centerpiece of the recording is the pairing of "So What/Impressions." It is here where I think Hancock accomplishes "creat[ing] our new way of looking at the compositions, to allow new freedoms within the structures in order to stimulate and provoke spontaneity within the group." That this is reharmonized is an understatement of British proportions. Patitucci opens the piece with a flurry of notes before moving into an elongated introduction to the song. The head is totally retooled and the "So What" portion is ruled abstractly by Hargrove, who succinctly solos over the scales of the piece. Brecker, who, with a salted earth policy, plays every note there is in a fierce solo, dictates the "Impressions" portion of the medley. Stunning.

I don't think Herbie Hancock really accomplished what he set out to do'that is, to reconsider the art of Miles Davis and John Coltrane and to provide a new perspective for the music. What he DID do was assemble a crack jazz band and give a splendid performance of recrystalized classics and some well-conceived originals.

The Sorcerer; The Poet; So What/Impressions; Misstery; Naima; Transition; My Ship; D Trane.