Dion at the NYCB Theatre at Westbury 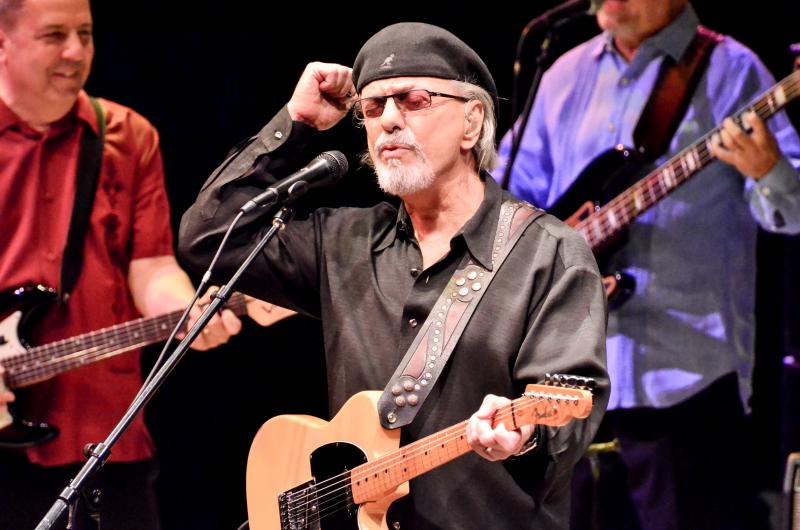 Rock 'N' Roll Hall Of Famer, Dion has been in the music business for almost 60. That is a very long time. It's an even longer time when you consider that at 77-years-old, Dion is still vibrant, relevant and releasing music. In fact, earlier in 2016, Dion released his latest CD New York Is My Home on Blue Horizon Records. The album which featured the title song duet with Paul Simon, reached #3 on the Billboard Top Blues Albums Chart.

The singer was born Dion Francis DiMucci on July 18, 1939. Known far and wide simply as Dion, DiMucci has been creating and releasing music since 1957. During his career he has scored a number of Top 40 hits with the Belmonts (Carlo Mastrangelo, Fred Milano, and Angelo D'Aleo) and as a solo act. During the late 1950s and early 1960s he delivered over a dozen Top 40 hits. Unlike many of his contemporaries, his, career, however, didn't end with the British Invasion. Even after the Beatles, Stones, Who, Kinks and others came on the scene, Dion continued to be a musical force. In the late '60s, Dion scored a Top 5 hit with "Abraham, Martin and John." In 1985 he was nominated for a Grammy for his I Put Away My Idols album (DaySpring Records, 1983) and in 2007, his blues album Bronx In Blue (SPV Records, 2006) was also nominated. In 1988, Dion wrote his autobiography with the help of Davin Seay. The book, The Wanderer: Dion's Story was published by a major imprint—HarperCollins. In 1989, Dion was inducted into the Rock 'n' Roll Hall of Fame. In 2011 he published another book, The Wanderer Talks Truth (St. Anthony Messenger Press). During the new millennium he has continued to release new music. In addition to New York Is My Home, Dion has released Bronx In Blue (SPV Records, 2006), Son of Skip James (SPV Records, 2007) and Tank Full Of Blues (Blue Horizon Records, 2011). In early 2015, he released the critically acclaimed acoustic set Live At The Bitter End, 1971 on Omnivore Recordings and as time marches on his classic tracks and albums have been reissued on a number of labels.

On a warm July evening, the Bronx-born Dion and his band treated the Westbury, NY faithful (as well as his sister Donna) to a seventeen song career-spanning "hometown" performance. The setlist featured almost everything that even a casual fan would have wanted to hear (and a few surprises): "Ride With Me," "Donna the Prima Donna," "Love Came to Me," "I'm Your Gangster of Love," "Ruby Baby" (the Drifters' song that he covered and released on the 1963 Columbia Records album of the same name) and covers of songs by Eddie Cochran ("Summertime Blues"), Bill Haley, but in actuality Big Joe Turner ("Shake, Rattle & Roll"), Willie Dixon ("Built For Comfort") and Neil Sedaka (an acoustic solo sing-along version of "Calendar Girl"). Dion also reached back to the late '50s and the Belmonts' origins with "A Teenager In Love" and "I Wonder Why" (both of which were characterized by the singer as being "perfect songs; songs that ask all the right questions.").

Among the many of the evening's highlights were the new songs "Apollo King" featuring Arno Hecht on saxophone and "Visionary Heart," which Dion explained was "about a dream I had about an imaginary conversation I had with Buddy Holly"). His late '60s hit "Abraham, Martin and John" (which featured video and stills of Abraham Lincoln, John and Bobby Kennedy and Martin Luther King, Jr. on the monitors above the stage) was preceded by a story about love and how all the world really needs is love.

Though too often thought of for his '50s output, Dion's music has always remained vital and contemporary. And even while being contemporary, it has retained the flavor of the borough of his birth and to some extent the New York of which Dion is so very much a product. During this performance, he and the band so very easily conveyed those facts.

As the night wound down, Dion introduced his band (Al Karosy on guitar, keyboardist Dennis DiBrizzi, Eddie Denise on bass and Gary Weiss on drums and Hecht) and rocked the crowd with a powerful version of "King of the New York Streets" from 1989's Yo Frankie! album (Arista Records). Revving it up a notch, Dion and the band closed the show with the megahits, "Runaround Sue" and "The Wanderer," a grouping that had the audience up on its feet and dancing in the aisles.

On a warm evening, Dion brought the cool. He was the epitome of at-ease charm. His multi-generational audience hung on his every word, syllable, note and gesture. Clearly, at home in his own skin, the singer smiled and joked with the audience as he played songs from every portion of his storied career. No...this wasn't and oldies show. It was a rock 'n' roll experience And Dion was the tour guide on a trip that rolled through the past and right into the present.