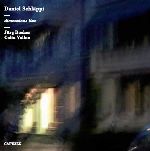 The very fine Dimensions Live is the second release from the band led by bassist Daniel Schläppi, which contains saxophonist Jürg Bucher and pianist Colin Vallon, the first simply named Dimensions (Brambus, 2003). Schläppi has also released Forces (Catwalk, 2007) on which he joined forces with Vallon, trombonist Nils Wogram, and teamed up with guitarist Tomas Sauter on the delightful Indian Summer (Catwalk, 2006).

This double CD release was recorded at the Bird's Eye Jazz Club in Basel, Switzerland on two successive nights, and mixed and master by Jan Erik Kangshaug at the famous Rainbow Studio. The sets are a mixed bag of standards, modern tunes, originals and group improvisations that allow the band to shift gears and provide variety and surprise for the audience.

The standards, "Three Little Words" (done twice), "The Meaning Of The Blues," Sammy Cahn's "I Should Care" and Cole Porter's "Just One Of Those Things," are the longest tracks because the tunes are used as the basis for arrangements that nevertheless feel as if they can go anywhere depending on the vagaries of the moment. Repeating "Three Little Words" allows us to peer into the nature of the arrangement and see those sections that are prepared and those that arise naturally.

The modern tunes include a rousing and driving version of John Scofield's "Out Of The City," Herbie Nichols' "2300 Skiddoo," which must be a nod to Bucher since his own band has put out The Music of Herbie Nichols and which demonstrates how underrated a composer he was. Carla Bley's "Sing Me Softly Of The Blues," provides the band with a vehicle on which to stretch out and bring her patented wit to the fore.

As a trio, Dimensions, although led by Schläppi, feels like a cooperative in that each voice and musical personality can be heard within the music. While Schläppi does solo, he functions (admirably) as the glue and provides each tune's pacing, balancing between the foreground and background. Bucher is as smooth as silk, with a full soft-edged tone that invites the listener to follow his well thought out solos. However, since his is the only pure single-line instrument, he is not heard as much as his band mates.

Special notice must be taken of Vallon. On Forces it was apparent that he quite naturally could take over the record, without sounding pushy or overbearing. The same happens here and his first notes burst with energy and incisiveness. His musical thoughts flow out naturally, as if they had been worked out, but always create tension since they are completely unpredictable. The highest compliment can be made by comparing Vallon to pianist Jean-Michel Pilc.

With the group improvisations acting as aural palate cleansers, the second set ends with a magnificent version of "Just One Of Those Things" that brings Dimensions to a rousing close, leaving the audience breathless.