Amy Cervini: Digging Me Digging You

By WILLIAM CAREY
January 20, 2012
Sign in to view read count 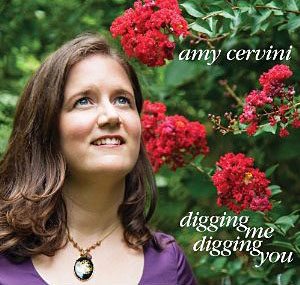 It's funny hearing such signature Blossom Dearie songs as "Dear John" and the Schoolhouse Rock classic "Figure Eight" without that oh-so-identifiable voice and delivery. Funny, but Amy Cervini is a talented enough vocalist that it isn't the slightest bit distracting to not have that adorably individual style and delivery that is unmistakably Blossom Dearie.

Cervini claims to be paying homage, not so much to her predecessor's specific work as a pianist or a vocalist, but to the choices Dearie made as an artist. Cervini herself makes all the right choices on this, her third, recording. The players she's chosen are not only top notch New York players, but the perfect backing band for a vocalist. Pianist Bruce Barth, bassist Matt Aronoff and drummer Matt Wilson are greatly sensitive, with huge ears and a feel for accompaniment that was also a feature of some of Dearie's best records, which featured players such as Kenny Burrell, Ray Brown, and Jo Jones. Her choice of tunes is also superb, sprinkling in Dearie classics with less often heard gems such as "Rhode Island," as well as standards that Dearie made her own, like "Tea for Two."

The session opens up with "Everything I've Got," with the perfect for tribute line, "Everything I've got belongs to you," though this is not the case when it comes to Cervini. With a mature voice that's nothing like the girlish voice to which Dearie was often ascribed, Cervini will never be mistaken for Dearie. Warm and full, while Cervini demonstrates some of the recently deceased singer's delivery on "Down with Love," she doesn't try to "do" Dearie. Barth plays wonderfully throughout, especially on ballads such as "I Like You, You're Nice," while Wilson continues to show why he is one of the most in-demand drummers around, further proving his ability to play in any setting and approaching the session with a restrained and laidback approach that is pitch-perfect for some classic Dearie bands.

One problem with tributes is that—especially when they are effective—it might ultimately be preferable to go straight to the source, and Digging Me Digging You does serve as a reminder of just how great Dearie was. There are moments when the songs feel a tad impersonal compared with the originals; how can any voice be quite as personal and special as Blossom Dearie's? Still, Cervini is also a talent deserving attention, making some very strong choices with Digging You Digging Me .

Everything I've Got; I Like You; Rhode Island; May I Come In; My Attorney Bernie; Hey John; Down With Love; Once Upon A Summertime; Doodlin Song; I'm Shadowing You; Tea For Two; The Physician; Figure Eight.