By MICHAEL MCCAW
September 18, 2005
Sign in to view read count 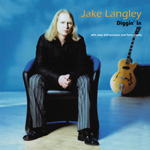 Archtop guitarist Jake Langley makes no bones about his group's sound, noting "we're not inventing anything new, but someone has to keep the [organ] tradition alive. And although the music on Diggin' In is dexterous and keeps with Langley's words, the proficiency of the album often outweighs its originality, which results in little surprise for the listener, nor any disappointment, save for the very issue of originality. Diggin' In simply exists as a pleasant vehicle for guitar, organ, and drums that lie within the lighter end of the organ tradition.

Often working in the same sound space as Wes Montgomery, as well as a bit of the instrumental George Benson of late, Langley's interpretations of the songs here are often familiar and unfold closely within the framework of the originals, with little variation. The group's take on Montgomery's "O.G.D." is typical of the date as a whole—Langley sticks on top of the opening melody, hardly breaking away from it until he rips into a speedy solo that eventually gives way to Joey DeFrancesco's more leisurely paced feature.

Having DeFrancesco as his primary foil was a wise move on Langley's part. But while the organist has proven in the past that he can break a date wide open, here he seems more subservient to the songs' original structure and voicings, not really taking any liberties to stab at something special—as he has done elsewhere, such as on Pat Martino's 2001 release Live at Yoshi's. One notable exception is his burning solo on "Gibraltar, where he breaks out of the mold and really raises the tune from the sound obscurity that plagues the rest of the album by inspiring his bandmates to ride along with him.

Opening with a considerable amount of forward motion and egged on by DeFrancesco's contrasting staccato and elongated notes, Langely builds momentum by gradually increasing his own pace, rather than jumping from normal speed to light speed, as he does elsewhere. The song also provides one of the few spotlights for drummer Terry Clarke, who contributes a nice solo, but like most of the album, it's nothing overtly memorable. In contrast, DeFrancesco's spotlight isn't his longest solo of the date (at only around a minute long), but his development is sharp and aggressive, bleeding over into his driving comping style on this particular track.

All critiques aside, Diggin' In is a pleasant listen that many listeners of a lighter organ trio sound will enjoy. From a technical standpoint the album is well-paced and the playing never hits a bad note. Nonetheless, as greasy organ trios go, there are a lot of other options out there, and Diggin' In rarely presents anything that warrants repeated listening.