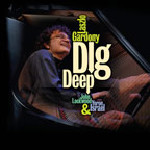 One favorite and under-appreciated pianist has been Hungarian-born Laszlo Gardony. His emigration to the United States in 1983 began a career in which his first albums (on both Antilles and Sunnyside) established a firmly swinging piano trio setting. Although the '90s were not a productive era, he has had four releases since 2001.

Dig Deepshows how the years have added to the pianist's sense of lyricism and rhythm. The opener, "In Transit," smacks of the early '60s soul-jazz era and notably of the work of Bobby Timmons. This is one toe-tapping melody that establishes a happy groove for the trio. Gardony re-creates the same vibe on "Out On Top" and "Heavy" and even re-arranges the Gershwin classic, "Summertime," so that it fits into pulse with the aforementioned titles.

Gardony also brings in his musical Hungarian heritage by incorporating church feelings into "Sunday Afternoon" as well as an Indian influence on "Rhymes." The use of unusual time signatures is not a novelty for the pianist as in the case of "In Transit" (7/4) and "Out on Top" (5/4).

This trio has been intact for the past six years and the in-the-pocket musicianship of John Lockwood on bass and Yoron Israel on drums is most telling. This is one recording on which the rhythm section acts as one.