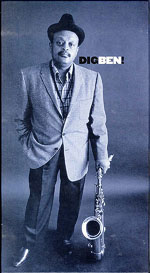 To have been young and Danish in the ‘60s! If you happened to live in Copenhagen during that period, then you had a strong chance of catching the great Ben Webster performing live in a random club, or perhaps on a radio broadcast. Webster sailed from New York to the Continent in 1964 and, after playing a club gig in London that led to subsequent European engagements, never again set foot on American soil. This set provides an exhaustive, magnificent chronicle of Webster’s European years, from the day he left the States to the day he died, almost nine years later in Amsterdam. During this period Webster never stopped performing and recording; he worked frequently with fellow American jazz expatriates Kenny Drew and Albert ‘Tootie’ Heath, as well as the young bass protégé Niels-Henning Ørsted Pedersen. In fact, this quartet appears on an entire CD of unreleased tracks, all of which were compiled from Webster’s own collection of reel-to-reel tapes. Unearthed are 80 minutes of live recordings captured in Copenhagen’s Jazzhus Montmartre over two evenings in March of 1968. This dream group stretches out on nine standards, the highlight of which has to be the nine-minute reading of “Old Folks," which will no doubt thrill the world’s Ben Webster ‘ballad-heads.’

Though the rest of the discs feature previously-released material, try and find any of it at Borders! Jam-packed with hardcore rarities, rehearsals and outtakes, this set will send Webster completists into a frenzy. Undoubtedly, the gem of the set is Disc 8: a fascinating 53-minute rehearsal aboard a Canadian River Steamboat alternating as a luxury hotel parked in the Copenhagen harbor. Webster commands a 20-piece orchestra as it prepares one of the leader’s original tunes entitled “Did You Call Her Today,” a composition you soon know by heart since it is presented in eight different takes, ranging in length from 22 seconds to seven minutes. The tape keeps rolling in between takes and we hear Webster’s oft-profane efforts to convey both his pleasure and frustration with the sound to a mostly non-English speaking group of musicians. This material provides a truly unique opportunity to experience the creative process practiced by one of history’s greatest jazz musicians.

The more you ‘dig’ into this mammoth tome, the more amazing nuggets you will find. One disc features a handful of recordings made just before Webster left the States -  in bassist Milt Hinton’s New York basement of all places. One of these tracks even features Webster on stride piano! Or, perhaps you’d like to sample Webster’s sole recording of “On Green Dolphin Street”? Jazz luminaries such as Dexter Gordon, Teddy Wilson and Buck Clayton all make cameo appearances, but this is Webster’s show through and through. Do right by your soul and make the investment.