Difford And Tilbrook at the Paramount 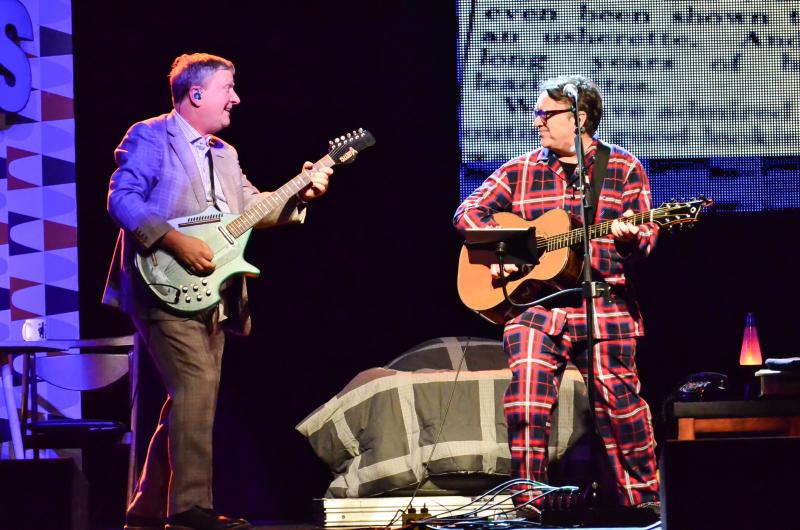 Christmas came approximately two weeks early to Long Island this year. The Paramount (located in Huntington, NY), the venue ranked by Billboard magazine as one of the best concert venues in the country, was the site of a fantastic show sub-billed as the At Odds Brothers. The duo of Difford and Tilbrook, the closest thing (among songwriting partnerships) to Lennon and McCartney since that dynamic duo ceased writing together, played a magical show consisting of acoustic and electric versions of their classic pop hits. Appearing alone and together, without any accompanying or supporting musicians, the two troubadours offered folksy takes on their most beloved songs.

With the stage dressed in the fashion of a bedroom circa the mid 1970s, Chris Difford and Glenn Tilbrook, following a video montage played to "Its A Beautiful Day," appeared dressed in pajamas and promptly kicked-off the evening in style with "Take Me, I'm Yours." The duo played the first few numbers in their jammies (and even paused to have a "breakfast" of orange juice with a spot of tea), making this an evening not quite like any other that the venue had seen during its short existence. As the night progressed, both of the musicians took the opportunity to change into street clothes (off stage, of course) while the other sang lead on a particular song, joining in to finish the performance of said song when filly dressed.

Though best known as the main components of Squeeze, Difford and Tilbrook took the opportunity to play without the other members of the band and showcase some of their own solo material. Difford played the humorous "Fat as a Fiddle" along with "Wrecked" and "Cowboys Are My Weakness." Tilbrook sang "Persephone" and "Ice Cream" from his solo canon.

In addition to the solo offerings, the duo took a trip down memory lane as they delivered highlights and deep tracks (while pictures, vignettes and abstract videos flashed behind them on a huge screen draped across the back of the stage) from all facets of their career. For every "Annie Get Your Gun" there was a "The Elephant Ride." For every "Pulling Mussels (From the Shell)," "Is That Love" and "Cool For Cats" there were new songs like "Nirvana," "Happy Days" and "Cradle To The Grave" (all of which can be found on the 2015 Caroline Records release Cradle To The Grave).

Playing two separate sets gave the musicians a chance to pace themselves as well as take the opportunity to answer audience questions (one crowd-member asked about the songwriting process, another asked how the musicians chose the songs to be played during a performance). Difford and Tilbrook did their best to answer these questions as well as a few others posed by the fans. This, as well as the loosey-goosey banter-filled format of the evening, allowed the duo to really connect with the audience. They also made sure that the crowd got exactly what they had come for by delivering rousing, kick-ass versions of the radio-friendly hits that prompted some music critics in the early '80s to hail Difford and Tilbrook as the second coming of Lennon and McCartney. "Black Coffee In Bed," "Some Fantastic Place," "Slap and Tickle" and "Up The Junction" all made their way into either the first or second set. The second set ended with a very special version of "Tempted" featuring Tilbrook on keyboards handling both his vocal sections as well as those originally handled by former Squeeze keyboardist Paul Carrack, while Difford strummed his guitar and offered his portion of the backing vocals.

It was on the encores that they really shined (if it was possible to excel more than they already had). "Another Nail In My Heart," If I Didn't Love You" and "Goodbye Girl" (a fitting ending number) all had the audience members out of their seats and on their feet dancing as if it was 1985.

Though the evening was billed as a performance by the At Odds Couple, Difford and Tilbrook's performance was anything but friction-filled. The two musicians played like a well oiled machine, working off of each other's energy. Difford's deeper and darker vocals played so well against Tilbrook's brighter sweeter styling. On many songs, Tilbrook's fabulous (and often under- rated) electric guitar playing meshed perfectly with Difford's acoustic strumming. This was definitely an evening for the fans—they came hoping for the best and left after receiving something that, in so many cases, only a mythical Santa Claus could have delivered—an early Christmas present that brought many of these fans back in time to their youth. And, under the tree, the audience members found their favorite present—a brightly wrapped Difford And Tilbrook song cycle. What an amazing evening of banter, music and new memories.