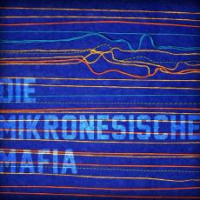 Die Mikronesische Mafia is technically a single work divided into five movements, but each track possesses its own identity that allows it to stand on its own as part of this compelling release. German guitarist Moritz Ecker wrote and recorded this music for octet in 2009 while studying jazz at Folkwang University of The Arts in Essen, but it's only seeing the light of day now.

Ecker failed to find names for each movement of this work, but succeeds in imbuing them with their own sonic signature. The stunning "Die Mikronesische Mafia No 1" sounds like a cross between Radiohead and Nik Bärtsch's Ronin. Hypnotic, arpeggiated guitar lines cross paths with rocking drums and horns lines, resulting in a paranoid and grandiose sound. Trumpeter Lars Kuklinski proves to be the breakout star on this number, as he delivers a powerful and expressive solo. "Die Mikronesische Mafia No 2" begins in a solemn place, but a directional change occurs when the horns join in with pointed punctuation. Ecker takes his time fleshing out his ideas on this one, roaming a bit more than the others.

A pastoral blend of horns—with flautist Axel Knappmeyer coasting atop the mix—bookends "Die Mikronesische Mafia No 3," while running counter to the moodier intentions that lay in wait at its center. The brief, fourth part of the package—a driving number that's more short jam than composition—proves to be the only piece that doesn't really fit comfortably with its peers. This number has plenty to offer, but doesn't bear the leader/composer's mark that is clearly visible everywhere else. "Die Mikronesische Mafia No 5" begins with a pleasant, if beguiling, guitar and saxophone introduction that doesn't hint at what's to come. High drama mixes with more intimate moments, as Ecker and crew close out this album with an adept mixture of attitude and intelligence.

This release, which barely cracks the thirty minute mark, is far shorter than the average jazz album, but is chockfull of wonderfully creative music. Ecker understands that it isn't about how much music you have, it's about what you put into the music.