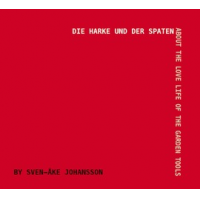 Part performance piece, part free improvisation, Die Harke und der Spaten ("The Rake and the Spade") is a musical stage play composed by Swedish jazz legend Sven-Åke Johansson. This recording, made in Malmö, Sweden in 1998, features a Who's Who of European improvisers and proponents of free jazz—a European free jazz that distinguishes itself from American music.

Johansson was there at the beginning of the European free scene, recording with founding fathers Peter Brötzmann, Alexander Von Schlippenbach, and Manfred Schoof on sessions such as Machine Gun (FMP, 1968) and the early Globe Unity Orchestra recordings. Moving to Berlin in 1968, he, like Brötzmann, dabbled in the Fluxus art movement and became interested in painting and drawing.

Where American free jazz blasted towards outer space, Johansson and a cast of continental players nurtured a European art music that, at times, can be quiet whispering dreams. Such is the music heard here. Johansson eschews his drum set for an accordion and the spoken word narrative. Percussion work is left to Raymond Strid, and the rhythm section (for lack of a better term) is rounded out by bassist Matthias Bauer and pianist Sten Sandell.

The performance piece involves the various positions and arrangements of a rake and spade on stage. These become the jumping off point of the five tracks. Johansson speaks lines (mostly in German with bits of English tossed in) emphasizing and repeating words for effect, not unlike a Dada performance. Trumpeter Axel Dorner, saxophonist Mats Gustafsson, and Per-Åke Holmlander on trombone and tuba kindle a minimalist obbligato of breathy passages and found notes, occasionally breaking into hurried and scrambled sections. Their signature flutters and knocking breath-work are demonstrated here in full effect. It is Sandell that maintains the light dancing mood throughout; the pianist is Johansson's constant companion and unifying voice.

This eccentric performance piece is puzzling at times, but nevertheless captivating.