By DOUG COLLETTE
February 27, 2016
Sign in to view read count 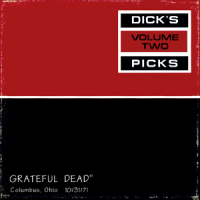 As Real Gone Music winds down its the four-year long reissue campaign devoted to the Grateful Dead's 'Dick's Picks' o the label presents one of the most distinctive titles in the archive series. recorded on Halloween night in 1971 at the Ohio Theatre in Columbus, Ohio. In a single cd, the only one of its kind the late Latvala curated, the album consists of the second set of the concert, comprising of a remarkable cross section of material culled from the iconic band's (at the time)fast-expanding repertoire.

Originally released in March 1995 in the limited scope of the time (distributed by Grateful Dead Merchandising and not initially through normal retail outlets), this now two-decade old title constitutes accelerated time travel with the benefit of its now two-decade vintage. Beginning with the first of what became a multitude of signature songs for the Dead, "Dark Star" initiates a virtually uninterrupted series of segues that also includes "St. Stephen" from the same late Sixties era. But the ultra high-spirited likes of "Sugar Magnolia," from the band's (second) landmark studio album of the Seventies, American Beauty, (Warner Bros, 1970) precedes that number, its place in time juxtaposed with a regular set closer in the later year's of the Grateful Dead, "Not Fade Away," itself coupled with a number of comparable dynamics and performance placement, "Going Down the Road Feelin' Bad."

All of which the streamlined ensemble renders with the streamlined agility that marked this era of the band's performing history as a quintet. Sans second drummer Mickey Hart but with the estimable addition of keyboardist Keith Godchaux, who had just begun touring with the band that very fall, the impromptu group-think generates the unusual improvisational epiphanies such as the "Jam" out of "Dark Star," recalling Archie Bell and the Drells' "Tighten Up," and the tease of "Cold Rain and Snow" referenced with knowing arch attitude prior to the penultimate number's references to inclement weather.

A glib dilettante or a mercenary record exec might dub this superficially arbitrary selection 'Grateful Dead Greatest Hits Live.' But it's more to the point that this band rarely relegated to permanent obscurity any tune with real durability; one corollary of that inclusive approach is the Grateful Dead's vision of their canon of songs, originals and covers, as a continuum with a logic comparable to their best performances, within which selection this excerpt of one qualifies. The customary caveat regarding audio quality appears on the back of Dick's Picks Volume Two, but the stereo separation as captured by recordist Rex Jackson is sublime throughout, a metaphor for the expansive approach the Grateful Dead enact for this portion of this Halloween concert.