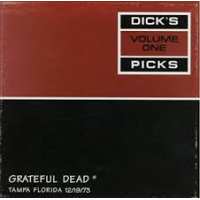 Concluding a reissue program begun in 2011, the Real Gone Music release of Grateful Dead Dick's Picks Volume One brings fitting perspective to a series that, in more ways than one, created a template for archiving an artist's work. And in an unusual approach that is peculiarly appropriate to the mindset of the iconoclastic band and its followers, to begin at the end of the thirty-six volumes and end with the beginning, informs the individual titles and the sequence as a whole with new insight as distinctive as it is keen.

A more predictable band than this iconic group would've made the self-referential likes of "Here Comes Sunshine" their regular opener, but the Grateful Dead instead use this selection from that year's studio album, Wake of the Flood (Grateful Dead, 1973) to carefully but insistently warm up and gain their bearing for even more extensive improvisational interludes later in the set. These two-discs doesn't contain the entire performance of December 19 in Tampa Florida—it's missing, for whatever reason, almost the entire first half of the second set—but the gargantuan string of segues on the second CD, including "He's Gone," "Truckin," "Nobody's Fault But Mine" sewn together by two segments of open jams, more than compensates. Tampa FL 12/19/73 doesn't seem like it's missing anything, especially when it concludes with the moody reflection juxtaposed with the cheery Chuck Berry cover "Around and Around."

The mutually inspiring, delicious contrast in the interplay between guitarist Jerry Garcia's instrument and keyboardist Keith Godchaux' acoustic piano continues to flower here. Prodded by bassist Phil Lesh, the pair romp through one of the later segments of rhythm guitarist Bob Weir's ambitious "Weather Report Suite," a harbinger of what an often-magnificent vehicle for extended improvisation this multi-part composition would become in the not too distant future. Notwithstanding the customary 'Caveat Emptor' on the back cover, the clarity of the audio here, including use of the entire stereo spectrum, is all the more impressive given that it's two-track recording by veteran crewmember Kidd Candelario.

Dick's Picks Volume One sets a high standard for the evolution of the series. The sequence of songs artfully alternates compact numbers such as "Big River" at the outset of the show with "Big Railroad Blues" just preceding twenty-one plus minutes of an eerie exploration of "Playing in the Band;" such a deft grasp of dynamics, on the part of the band and Dick Latvala himself, allows both the musicians and their listeners to catch the breath and take another deep one before the next dive into uncharted territory (with single drummer Bill Kreutzmann the ballast for such the exploration). It's a tribute to the collective technique, engineering and instrumental, that the effect, no doubt palpable in the venue, translated so fully and completely to recording.

As with all the Real Gone sets, the packaging has been retained from its original issue which in this case is the generic graphics and minimal liner inserts as adorned such titles upon their original release (and in fact for the first half dozen titles). But that emphasis on music above all else derived directly from the Grateful Dead's concept of performance and Dick's Picks Volume One extends the logic of that approach, the wisdom of its choice to be borne out, in varying forms, by all its successors from the initial direct merchandising to more expansive retail availability and now in full distribution.