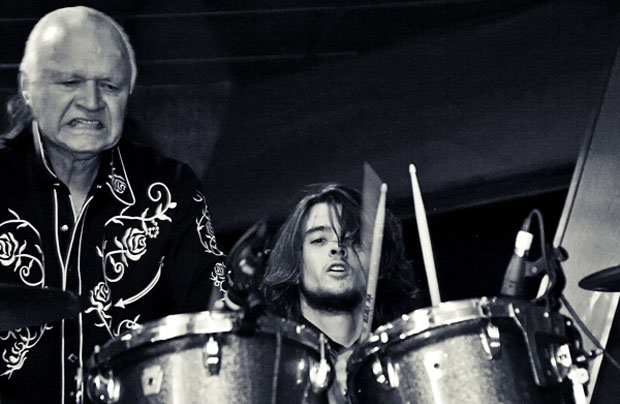 
What could be a more appropriate venue to witness the heady spectacle that is a Dick Dale show? The Jewel is one of the cruise boats operated by the Rocks Off promoters, here in collaboration with the B.B. King Blues Club. So, at last, the unchallenged king of surf rock guitar actually got to perform on the waves, or at least the sometimes quite pronounced undulations of the East River. The Rocks Off concept is to pretty much kidnap its punters, imposing a strict boarding and sailing time. After that, for around the next three hours, the crowd is imprisoned on the pirate seas, surrounded by loud rock 'n' roll, beer 'n' shots and a homemade buffet—a certain recipe for disaster! Fortunately, it took only a short while to reconcile booze, fodder and a general bobbing motion. The DJ's booming classic rock selection set the tone as the boat seemed to circle aimlessly around the East River, with no particular destination in mind. The audience could choose between staking out a seat in the surprisingly small below-deck space, or flapping in the breeze up above. It didn't take long for the crowd to work itself up into a suitably eager mood, and by the time Dale hit the small, low-level stage, most seats were abandoned in favor of a frontal crush.

Playing with his son Jimmy on drums and Sam Bolle on bass, southpaw slinger Dale kept the assault direct and driving. All he needed was a wall of vintage Fender amplifiers and a cranked-up guitar, shunning effects pedals and similar tomfoolery. Nevertheless, his multihued sound was larger than most lives, aggressively picked out with a stinging attack. Dale's sound lies directly at his fingertips. At 74 years-old, and following a recent battle with cancer, he remains the embodiment of ultimate rock 'n' roll vitality. Few guitarists are capable of building up such sustained excitement.

This was not without considerable dynamic support in the bass 'n' drums department. Bolle and Dale Jr. are certainly no shadowy sidemen. This was a more expansive set, compared to the only other time catching Dale, as his unflagging stream-of-surf hits piled up into an inexhaustibly advanced medley of instantly recognizable melodies. "Misirlou," "The Wedge," "Mr. Peppermint Man," one tune slamming into another. No egotist, the man mingled his own choice gems with the regular interspersing of classic songs, including chestnuts from Johnny Cash (" Ghost Riders In The Sky," "Ring Of Fire," delivered with a suitably gruff vocal), Jimi Hendrix ("Third Stone From The Sun") and even his biggest guitar competitor, Link Wray ("Rumble"). There was also, most amusingly, Deep Purple's "Smoke On The Water."

Besides the core trio propulsion, the set also took curves into a harmonica-blowing set piece for the leader, as well as Dick joining Jimmy for a bout of double-drum thunder, then playing on the bass with his sticks. Dale dealt well with the cruisin'—remarking that he was unaccustomed to performing whilst experiencing an authentic surf-motion sensation. There was no sign of any adverse effect on his reverberant string-ecstasy.


The bad news was that veteran bluesman Hubert Sumlin wasn't feeling too well, and had pulled out of his two-nighter at the Iridium on Broadway. The good news was that the club had managed to secure a suitably impressive replacement to guest with The Nighthawks. Californian singer/guitarist Joe Louis Walker took over, bringing along his regular sideman Murali Coryell. Yes, he's the soul-blues son of Larry. Veteran of the R&B scene, The Nighthawks formed way back in 1972, fronted by harmonicist Mark Wenner, from Washington DC.

Over the course of two substantial sets, the repertoire wasn't repeated, as the songs slid from blues to soul, and from boogie to rock 'n' roll. The Nighthawks opened up each set with a clutch of its own numbers, beginning in semi-acoustic mode, then building up the power. The full force was felt when Wenner started blowing his amped- up harp. When Walker hit the stage, he didn't always crank up his accustomed heat. He made it clear that he also digs the slow 'n' subtle blues; he likes to slink. Walker is a master of the dramatic pause, and the dynamic swoop from sparseness up to explosiveness.

Most of the material was gathered from his own albums, but there were also a couple of classic Howlin' Wolf songs, in tribute to the absent Sumlin, who was the lead guitarist on their original incarnations. In keeping with the Nighthawk tradition of nearly every member being a singer, Coryell was also given the spotlight. "In The Room With Jimi" (a song inspired by his experience as a babe in the arms of Larry and Hendrix) is always a poignant highlight of any performance by Walker, when Murali's also onstage. Another electric passage was provided during the completely acoustic harmonica walkabout by Wenner and Walker, as they tooted individually to each audience member of a pretty full house; this was the utmost in personalized blues.


Despite its massively cross-genre approach to bookings, Nublu has not particularly concentrated on the blues. As a low-key taster for a new Monday night residency, singer-guitarist Bill Sims Jr. has been playing select dates at the temporarily relocated East Village club. He's normally found gigging at Terra Blues on Bleecker Street, just west a few blocks, in Greenwich Village. Here, at Nublu, there was the sense that he'd have to work on gathering a regular gang of devotees. On the evidence of this late- night showing, word-of-mouth will assuredly spread like wildfire.

When Sims and his combo first took to the stage, the sparse audience was dotted around the edges of the room. As the midnight hour passed, the second wave of Nublu regulars began to arrive, following a lull after the early evening Butch Morris performance. So powerful was the bluesy groove that, steadily, the entire room's occupants began to rise, getting into a dancin' state. Sims used the blues grind as his foundation, but his songs also took in strong elements of soul, funk, boogie and anything else that rolls along unstoppably. His not-so-secret weapon was a tight trumpet/trombone horn section that expanded the potential soloing range with individual shows of blazing virtuosity. So, besides the expected guitar frazzle, there was a fruity brass explosion to boot. It was probably the trombonist Clark Gayton who made the Nublu connection, as his Explorations In Dub outfit appears regularly at this joint. Along with trumpeter Kenny Rampton, Sims has got himself an exceptional horn-assault team. The jackknifing between his own guitar solos and their fiery contributions left few moments to pause between the varied grooves.


The core Harriet Tubman Trio features guitarist Brandon Ross, bassist Melvin Gibbs and drummer J.T. Lewis, but has recently been developing a new project angled at doubling its range. This involves adding Graham Haynes on cornet and electronics, plus the laptop/turntables combination of DJ Logic and Val Inc. The stated aim for the evening was to address John Coltrane's Ascension (Impulse!, 1965), though as the music unwound, there was no audible connection with that work. Perhaps it was too predictable to expect sampled gobbets from the original vinyl, or even a direct reflection of its sonic terrain. Perhaps the group was just coincidentally using the word itself, for a general evocative power. Regardless of the intent, there was no impediment to the performance. Few audience members would have expected a direct interpretation anyway, knowing the nature of these players and this band.

The Double Trio formation appeared in NYC only a few months earlier, as part of the Undead Jazzfest. On that occasion, they were placed at the very end of the night, crumpling the interior of Sullivan Hall with their heightened volume levels. That set was considerably more aggressive and hyperactive when placed beside this less extreme Poisson appearance.

On another night, a reaction could have been different. Having just arrived from a more brutally cathartic bout of revelatory bedlam (a Ben Gerstein large ensemble gig at Roulette), it was absolutely appropriate and desirable to bathe in the Double Trio's aural slipstream. It's possible that other audience members, with different (and quieter) earlier experiences might have found it harder to let themselves float. This was sound that was very open to interpretation, and personal response. Relaxation and concentration were required. "Don't be a slave to anything," instructed Gibbs, in closing, reflecting the experience of the band's heroine namesake. Freedom in improvisation was stretched into further realms.