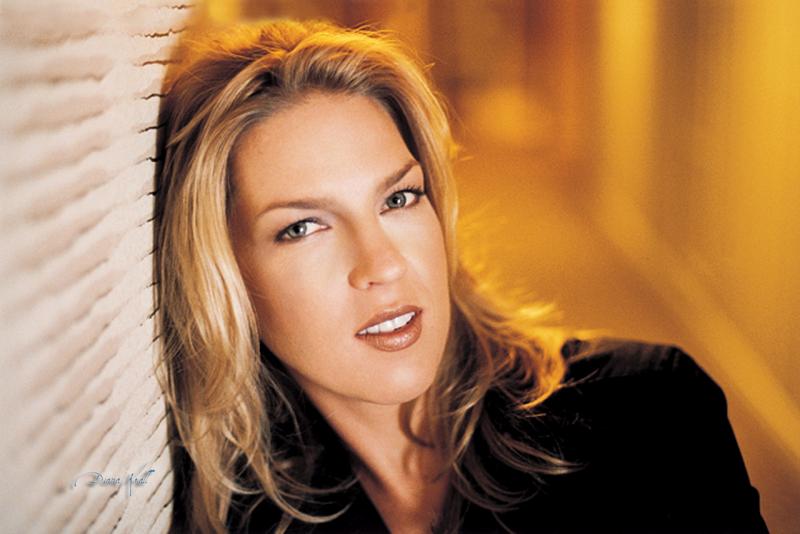 By BELINDA WARE
May 11, 2013
Sign in to view read count
Diana Krall is more than just a jazz songstress. She established herself as a solid interpreter of standards with her rendition of the Dusty Springfield's classic, "The Look of Love," making her mark with notable acoustic arrangements coupled with openly sensuous vocals carrying the tune.

Krall is one of the jazz world's uniquely eclectic artists who has built a respectable longevity with her career. She is consistent as a serious jazz artist, both in the recording studio as well as in her visual branding. When it comes to CD cover art, she appears to have garnered notable attention on a similar level to her musical artistry. Krall is fashion-driven, with a personal preference for 1940s Hollywood glamour, with a retro vibe particularly noted in her most recent release, Glad Rag Doll (Verve, 2012).

Glad Rag Doll is personal for Krall, and she's not the least bit shy with this one. Krall steps out modeling a lingerie ensemble in the cover photo, with comfortable humility and dignity that speaks enchantment as she appears to be daydreaming of a love afar. The cover captures her interpretation of the beauty of femininity and, for a moment, one would think it was a romance novel cover. Her influence for going avant-garde with a teddy and nylons originates from her personal desire to "play dress-up" as one of Alfred Cheney Johnston's Ziegfeld girls at least one time on a CD cover.

Glad Rag Doll introduces a new level of comfort in the depth of intimacy with Krall's vocal style. Krall brings her sultry jazz interpretations to vaudeville songs written between World War I and World War II. Her vocals are bluesy, with an accent of jazz. No large orchestras on this one. It's different. It's rudimentary. Voice and piano. Voice and guitar. She's returning to the music of trumpeter/singer Louis Armstrong and late night piano bars, with her bluesy and straight-ahead jazz intonations and vocal simplicity. The music is basic jazz and blues.

Her jazz voice is soft, breathy and pronounced in "Garden in the Rain," with a raw presence delicately accented by soft piano licks. It is reminiscent of singer Billie Holiday, with only piano and voice carrying the tune and capturing a 1930s jazz feel. Krall's voice is up front and it's enough. She takes down the walls of privacy and exposes her heart openly in love with her poignant phrasing on "All I Do Is Dream of You ."

In "As Long As I Love," she speaks to the love of her life and shares a poetic serenade in lyrics that seem even conversational:

"You'll always be mine
I'll make a crown of sparkling stars for you
from the skies.
But how can I compare them to
the starlight shines in your eyes."


Krall shares, in song, the words of a woman in love who wants to hold on to that feeling with all she's got; and for a moment, she bares all her emotions clearly in lyrical tone and expression, with minimal instrumentation surrounding her vocals.

Where did this direction come from? Glad Rag Doll is personal for Krall. She travels back in time to her childhood and the 1920s music she grew up to love and cherish—the music of the era that gave way to the birth of jazz in New Orleans, an era that with which Krall became fascinated as a child, leading her to discover her own voice in jazz.

Krall partnered with singer/songwriter Bob Dylan's one-time guitarist, legendary Americana producer T Bone Burnett, to help her put this unique project together, starting off with the tedious selection of choice Vaudeville picks from a list of 35 songs from her father's collection of music that she adored during her childhood.

Krall interprets songs such as "We Just Couldn't Say Goodbye" with a subtle relaxed flair similar to 1920s jazz songstress Annette Hanshaw. She exposes her feminine vulnerabilities in her soft vocal delivery on "I'm a Little Mixed Up." She's artistic, as she plays with shades of blue in her vocal intonations of Ray Charles' "Lonely Avenue," which has a Miles Davis feel to its musical arrangement.

With the title track, Krall tells the story of the struggle for women's rights in the '20s through vocal sarcasm, in a tone that is slightly theatrical. Krall recreates that time in history with subtle emotion and story-driven lyrics.

For the jazz purist, this is not a typical record label release. This project is all Krall—her past influences, her present expression and her future vision, all wrapped up in one CD. She took time to put this together. She went back to her childhood and pulled songs from her father's collection. She listened to stacks of classic 78 records to select the songs for the final cut. It has been a project in the making for some time, a project that she was determined to record, and now she's done it—and this time, she did it her way.

Glad Rag Doll is filled with songs that tell the stories of love and romance, with Krall's recognizable vocal purity. Her intonation and interpretation of Vaudeville standards on this CD speak to her personal mastery of expression in mind, body and soul, through the timeless art form of jazz.