By DAVID ADLER
April 24, 2002
Sign in to view read count
Recorded five years apart, these two Blue Note reissues highlight jazz creativity of very different kinds. Bobby Hutcherson's Dialogue is a shining example of what can be called the Andrew Hill aesthetic. Thad Jones & Mel Lewis's Consummation features the highly original big-band craftsmanship of the late Thad Jones. Interestingly, Richard Davis is the bassist on both records, serving as a link between the two worlds. 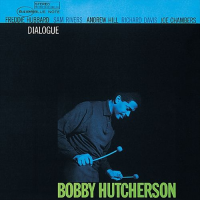 Dialogue, first issued in 1965, was Hutcherson's debut as a leader, and it reflects lessons learned on adventurous recording dates like Andrew Hill's Point of Departure and Eric Dolphy's Out to Lunch. Hill is the pianist on the Dialogue session, and the composer of three of its five tracks (drummer Joe Chambers penned the other two). Freddie Hubbard and Sam Rivers complete the lineup, bringing straight-ahead and avant-garde concepts into direct and felicitous contact. The polyglot eccentricity of Hill's work is immediately striking: "Catta" consists of repeated mambo patterns, "Les Noirs Marchant" is an avant-garde march, and "Ghetto Lights" is an angular shuffle blues (on which Hubbard is muted and Rivers plays soprano). Chambers's mellow, moody "Idle While" finds Rivers on flute; Hill lays out. And the title track, also by Chambers, is a free-form exploration full of surprising timbral shifts. Hill's devotees should note the inclusion here of "Jasper," a straight up-tempo blues, as a bonus track; the tune first wound up on Hutcherson's 1979 release Spiral, but was later excised. 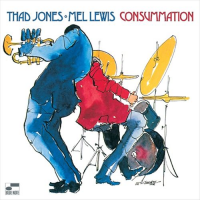 Consummation provides a look back at what we now know as the Vanguard Jazz Orchestra. Back in 1970, Thad Jones and Mel Lewis were piloting this incredible big band beyond conventional boundaries. On pieces like "Us" and "Ahunk Ahunk" they bring the funk, with Richard Davis and Roland Hanna playing electric instruments and David Spinozza laying down dirty rhythm guitar. The band roars on more bop-oriented tracks like "Tiptoe" and "Fingers." Jerome Richardson, Billy Harper, Marvin Stamm, Benny Powell, Jerry Dodgion, and Eddie Daniels (on tenor sax) are just some of the towering soloists. Jones's fluegelhorn is set against French horns on the beautiful title track, and his performances on the classic "A Child Is Born" and the almost Mingus-like "Dedication" are extraordinary. A strong candidate for reissue of the year.