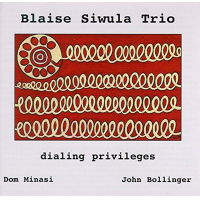 Siwula, Minasi and Bollinger- three names unlikely to kindle recognition in the minds of most jazz fans, myself included. Fortunately, as this disc goes a long way toward professing, what they lack in the notoriety department they more than make up in diabolically deployed musical cunning. Siwula is of the saxophone school that posits the virtues of maximum density in minimum space. His taut swirling lines revolve in rapid orbits around Minasi’s chattering machine gun string pops in an agreement of attack, which routinely stuns in its level of confluence. He can rouse squealing torrents from his reed with the same facility as more lyrical strains of sound and his unfailing unpredictability always keeps things interesting across the eight lengthy tracks included herein. Minasi is similarly idiosyncratic. He applies a maddening string theory to his amplified instrument that coaxes dark emotive chords like a dusky snake charmer wooing a cobra from a woven basket. Straight harmonic lines are rarely his chosen recourse. Instead he favors a frightening variety of fractured plectrum eroding strums. As the third combustive element in this dazzling unit Bollinger’s junkyard traps are a fitting capstone to the group. He alternates between thunderous rhythmic cloudbursts and tractile streams of stick-generated static ranging over a drum kit that sounds precariously constructed and ever on the verge of imploding.

The compositions, which arise from the fertile minds of all three men, are equally galvanizing in terms of conception and application. Most feature brief and often fragmentary theme statements by one or all of the players before a furious dissolve into collective improvisation. The opening “Tendencies in Tandem” focuses on the incredibly tight interplay between Siwula and Minasi with Bollinger’s loose drums opening up a piebald medley of rhythms underneath. “Trawler” starts out almost conventionally melodic, before the bottom falls out into a dizzying free fall coupled with nosebleed inducing ascents. The heated rancor of Siwula’s solo on “My Dad’s a Really Nice Fella” stands in stark contrast to the amicable sentiment of the piece’s title paving a serpentine way for Minasi’s choppy string sculptures and Bollinger’s volcanic eruptions which signal a close. On the eerie “Take Me to the Factory House” the players once again build a seething malaise of tension from modest beginnings. The piece gains steam in a boiling surge that eventually dissipates in an uneasy resolution of the opening theme. “Circle Down” works in analogous fashion, moving from lyrical flirtations to an effervescent glorification of dissonant lines and back again. This trio’s collective approach is both intractable and all-inclusive, a temperamental juxtaposition that they manage to harness to magnificent effect. Taken in a single sitting the music of these three can be a thorny swallow, but any pain incurred is worth it for the payoff their inventions provide.

Tracks:Tendencies in Tandem/ Mom’s Garden/ Trawler/ My Dad’s a Really Nice Fella/ Take Me to the Factory House/ What Monk/ Strange/ Circle Down.