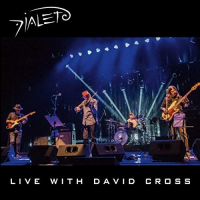 Howzabout Dialeto: Live with David Cross the next time this mood finds you? Is a set that simultaneously honors one of Eastern Europe's legendary musicologists and classical composers AND one of Western Europe's legendary progressive rock fusion ensembles, powerfully rendered by a hard-hitting power trio from Brazil, "different" enough?

As Dialeto, Nelson Coelho (guitars), Fred Barley (drums and vocals) and Gabriel Costa (bass and vocals) performed this concert in São Paulo to promote their conceptual piece Bartók in Rock (2017, Chromatic Music), a tribute to Bela Bartók, one of the greatest experts in Eastern Europe musical folklore and one of Hungary's greatest classical composers. British violinist and vocalist David Cross joins the trio after eight Bartok pieces; Cross's tenure in King Crimson coincided with one of its most fertile periods, from 1973's Larks' Tongues in Aspic (Island Records) through that band's live finale USA (Island Records) released in 1975, and he brings to Dialeto's stage many of that era's iconic Crimson compositions.

Dialeto cranks up the rock 'n' roll energy in "Folk Dance 2: Peasant Costume" in their survey of Bartok's "Roumanian Folk Dance" and "Mikrokosmos" songbooks, while Cross' violin introduces the first intimations of King Crimson in "Mikrokosmos 113-Bulgarian Rhythm I" when his electronic violin and Coelho's electric guitar melt into a singular sheet of electronic sound. Heavy-footed and dark, "The Young Bride-For Children Vol. 1 No. 17" sounds like something more for the Young Bride of Frankenstein, a genuine talisman of Brazilian-European macabre.

Cross' version of KC's "Exiles" is an extended reminder of the musical heft and power of this generation Crimson as his elegiac, restless violin sings out the wordless groans of a heart broken in interpersonal exile. Both "The Talking Drum" and "Larks' Tongues in Aspic Part 2" are mostly improvisations played so furiously that they venture into the demonic—they're simply scary good.

Music rarely gets more arts-y, rock-y, or live-ly, than Dialeto: Live with David Cross; the first-rate primer into one of the most important and influential progressive rock bands in the genre's history seems like a bonus.