By DAN MCCLENAGHAN
August 28, 2019
Sign in to view read count 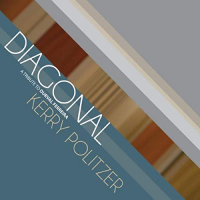 Portland, Oregon-based pianist Kerry Politzer has a thing for bossa nova. Her immersion into sounds from Brazil comes into full blossom with her sixth album, Diagonal.

Diagonal isn't a typical mix of the favorites—Jobim and Giberto. Instead Politzer embraces the music of guitarist/composer Durvel Ferreira (1935-2007), who, in his heyday, had his tunes covered by the likes of saxophonists Cannonball Adderley and Stan Getz, vocalist Sarah Vaughn and flutist Herbie Mann.

Politzer and her band are masterful in their interpretations, playing a smooth-flowing stream of authentic bossa nova, along with three Politzer originals composed in Durvel's bebop-meets-bossa style, including a sizzling "O Gato" that gives off a good deal more heat than what might be expected from the tradition. The majority of the album is instrumental, with some of Politzer's beautifully done vocals slipped into the mix: a gorgeous take on Durvel's "Moca Flor," in Portugese, and "The Day It Rained," in a hushed and soothing English.

Politzer has crafted all of the arrangements, perfectly. Diagonal can sit proudly on the shelf beside Getz/Gilberto (Verve, 1963), and would hold its own on the radio with Astrud Gilberto singing "The Girl from Ipanema."