By HRAYR ATTARIAN
December 6, 2011
Sign in to view read count 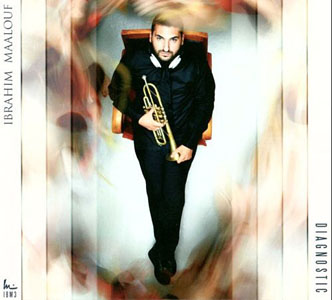 Much like his uncle, the celebrated author Amin Maalouf—who brought Levantine raconteur to the western novel—trumpeter/composer Ibrahim Maalouf infuses his jazz with Middle Eastern musicality. On Diagnostic—the last installment of a trilogy—Maalouf actually draws from many different sources to create a unique sound that remains definitely in the jazz tradition.

The all-woman, Franco-Brazilian Batacuda group Zalindê brings a Latin sound to pieces like to "Maeva in Wonderland," especially after the midpoint, when Maalouf switches from trumpet to piano.

Elsewhere, originals like "Lilly (is 2)" and "Will Soon Be A Woman" are reminiscent of Ryuichi Sakamoto's soundtracks, flowing into each other starting with a piano sonata followed by Maalouf's lyrical trumpet, mirrored in Sarah Nemtanu's tziganesque violin and buoyed by the surprisingly mellifluous percussion.

A cinematic atmosphere pervades throughout, a modal trumpet melody flowing over the vocal chorus and electronics of the melancholic "Your Soul," while the bluesy "Never Serious" opens with Nenad Gajin's blistering guitar that, with the addition of heavy percussion, tubaist Jérémie Dufort and accordionist Jasko Ramic, sounds like a marching band from the streets of an old Ottoman city.

"Beirut," the bonus track, composed a mere two years after the end of a civil war that devastated the city, Maalouf's melancholic trumpet meandering through the back alleys and avenues, as it reflects the tragic beauty of a city in ruins. A rocking group interplay closes the track with cautious hopefulness.

Although the record is heavy on ambience, it has its share of interesting improvisations. Michael Jackson's "They Don't Care About Us" starts off with radio broadcast snippets about the pop icon, and then the band launches full-force into a percussion-heavy tune driven by saxophonist Sedar Barcin, who creates the mood of a traditional Arabic celebratory event. Maalouf stretches out with hints of free jazz, as he pays homage to the late legend.

An imaginative duet between Ramic and violinist Jasser Haj Yousef sets the stage for another lengthy trumpet solo from Maalouf, sounding like an eastern reed pipe, on "All The Beautiful Things," while also featuring Guo Gan's erhu's (Chinese two-stringed instrument) peppering it with far Eastern tones.

There is no doubt that Maalouf is a virtuoso and, although this album feels a bit heavy on ambience and a bit cluttered by various influences, it still has enough improvisational substance to be enjoyed by jazz purists and world music aficionados alike.

Lily (is 2); Will Soon Be a Woman; Intro; Maeva in the Wonderland; Your Soul; Everything or Nothing; Never Serious; They Don't Care About Us; Douce; All The Beautiful Things; DIAGNOSTIC; Beirut.