The highlight of the CD, and the closer of the original LP, is a fantastic, crazy, original take on Dizzy Gillespie’s 'A Night in Tunisia.' 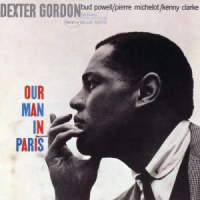 For some reason, Dexter Gordon doesn't immediately leap to my mind when I think of A-list bop saxmen. He should. Our Man in Paris is all the evidence you need.

Gordon made a bunch of terrific records for Blue Note from 1961 to 1964. Some say Go! from 1962, with pianist Sonny Clark, is the best of the bunch, and I can't really argue with that. But Our Man in Paris is every bit its equal, based largely on the strength of three songs and the presence of seminal bebop pianist Bud Powell.

As the title implies, Our Man in Paris was recorded in the City of Lights. It's a simple bop quartet with Gordon on sax, Powell on piano, American Kenny Clarke on drums and Frenchman Pierre Michelot on bass. It's a simple lineup, but powerful.

The album kicks off with a wild rendition of the Charlie Parker classic "Scrapple From the Apple." Gordon is on fire, and Powell is sublime. This is no mere imitation. It's full of original ideas and endless energy, using the Parker tune as a jumping-off point for inspired solos.

Next up is another jazz chestnut, "Willow Weep for Me." It's been recorded a million times by a million artists, and my favorite version is still Art Tatum on solo piano. But the Gordon-Powell version is a close second, full of smoky noir flavor and, again, clever soloing that makes this more than a mere blues.

A couple more standards follow: "Broadway," which sounds suspiciously like Fats Waller's "Lounging at the Waldorf," and the ballad "Stairway to the Stars."

And then the highlight of the CD, and the closer of the original LP, a fantastic, crazy, original take on Dizzy Gillespie's "A Night in Tunisia," perhaps my all-time favorite jazz composition. Again, it's a tune that's been covered by hundreds of jazz musicians—definitively by both Diz himself and Charlie Parker in the 1940s. This is a more modern interpretation, and Gordon is positively exuberant, blowing line after line after line of original ideas, followed by Powell with some nice noodling on the keyboard.

The CD adds two more cuts to the LP, neither essential: a pleasant mid-tempo version of "Our Love is Here to Stay" and a sax-less take of "Like Someone in Love," featuring Bud Powell sounding very un-Powell-like. No clever bop-istries here, just nice, unremarkable melodies.

Funny thing about Our Man in Paris. I've owned the record (and now the CD) for decades, but it's not one I go to often. And yet once I do play the album, I wind up listening to it over and over. If it's not in your collection, it should be. Gordon is one of the all-time best boppers, and Paris is arguably his best recording.