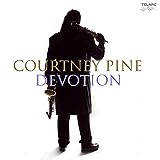 The management typically frowns on an initial discourse regarding the issuing record label when writing a review, but in the case of Courtney Pine's debut on Telarc Jazz, I feel it is warranted.  Compared with the majority of Telarc's releases (dead middle mainstream) Mr. Pine's new release can only be approached by those of Monty Alexander's with respect to pushing the genre envelope, and honestly, Mr. Alexander has nothing on Courtney Pine.

Born March 18, 1964 in London, England, Courtney Pine was to emerge in the mid-1980s as the next John Coltrane at the same time Wynton Marsalis sounded like the heir to Miles Davis.  He grew up playing funk and reggae before migrating to the edge of jazz standards.  He is a master of several instruments, including the soprano and tenor saxophones and that most difficult mistress, the bass clarinet.  He released several fine recordings on Antilles/Island ( Journey to the Urge Within ) but lost direction in the mid-1990s.

Devotion is Courtney Pine's first release since 1998's Another Story.  It is a loud, jazzy, funky, reggae, rocking affair bursting at the seams with cross influences and counter rhythms.  The recording is as highly produced as most contemporary and smooth jazz offerings...but contemporary or smooth jazz this is not.  In fact, if I were to have to describe this disc with one line it would be—"Devotion is the reincarnation of Julian and Nate Adderley's Band in the 22nd Century."  After an electric introduction the disc blasts off with Pine's "Soul Sister," a transmogrified "Work Song" as a Phil Spector "Wall of Sound" taken to infinity.  The title cut has a reggae vibe with Pine weaving in and out like the ghost of Eddie Harris calling out the name of Les McCann.

Pine extends his jazz-funk jones into his compositions "Osibisa," a big band Latin groove, and "Translusance," which contains some nifty off-beat drumming, a killer hook and a sitar (I hear early Rolling Stones and late Beatles here).  "UK" might be the best piece on the record, a cross between the Stax House and 1980s Saturday Night Live Bands.  The instrumental pieces are better than the vocal pieces and there is plenty of Pine for everyone.  Had Mr. Pine been wandering in the desert before, he has emerged into the oasis of his own making.

Visit Courtney Pine and Telarc Jazz on the web.