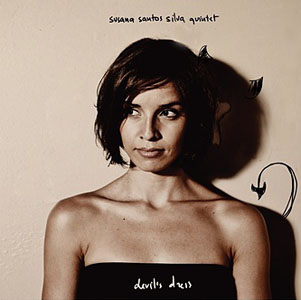 The Devil wears many guises, as does the music on Devil's Dress. Trumpeter Susana Santos Silva spans a variety of styles and, while some songs contain a dark presence and power that perfectly suits Beelzebub's reputation, other songs have a brighter outlook that looks upward toward the skies, not downward toward Hades.

While Devil's Dress is Silva's debut, she is also part of the brilliant big band sound of the Orquestra Jazz de Matosinhos, which worked with guitarist Kurt Rosenwinkel on his thrilling Our Secret World (Wommusic, 2010). Silva's own music contains the same spirit and sophistication inherent in the work of the OJM, albeit on a smaller and more personal scale, but she has some help along the way. André Fernandes' guitar work, which can be alternately hazy and distorted, locked into time, or loose and atmospheric, is a key component in this musical mixture, and tenor saxophonist Zé Pedro Coelho is like a sibling to Silva, attached at the hip in some junctures and fighting like mad during others.

Silva's trumpet work falls somewhere between Ron Miles and Ron Horton, with a little Dave Douglas thrown in for good measure. Her tone can be buttery or bold, a rare combination for a trumpeter, and she isn't afraid to to experiment with smeared notes and out-of-focus tones, which give the music a more personal sound. Blooming songs of beauty ("Warmth") give pause to admire her gliding horn work, as do some dirge-like excursions of an ethereal nature ("Anjo Da Guarda"), but some of the most challenging material proves to be the most intriguing. The title track, which shifts from an ominous introduction to a slamming rock groove with distorted guitar, eventually ending up in a loose section of semi-free play after the horns fight and ratchet up the tension, is the perfect example of nothing ventured, nothing gained. It's one of the riskier numbers, but it proves to be one of the most rewarding as well.

While the type of music on Devil's Dress can vary largely from track to track, ranging from gauzy and loosely flowing to pungent and powerful, the quality of the performances always remains consistently high.