By LARRY TAYLOR
September 14, 2010
Sign in to view read count 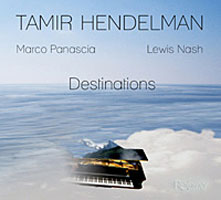 Well recognized for 10 years as an important member of drummer Jeff Hamilton's Trio and the Clayton-Hamilton Jazz Orchestra, pianist Tamir Hendelman has also gained recognition as an accompanist for singers such as Tierney Sutton. As well, he is a go-to pianist for numerous sessions with top musicians.

After the success of his first trio recording, Playground (Swing Brothers, 2008), Destinations appears on a larger label, Resonance. Here, Hendelman's trio features drummer Lewis Nash—a great drummer who, standing out all the way, is a commanding force, whether driving the group explosively forward, providing delicate shading with his brushes, or trading licks with his cohorts, In turn, bassist Marco Panascia makes a major contribution.

Not to be outshone, Hendelman is the guiding hand, arranging new takes on familiar tunes and impressing with two originals. A technically brilliant stylist, his playing is always subtly tasteful; eschewing the dazzling bombast of some of today's' younger pianists, his guiding lights are Bill Evans and Bill Charlap.

Hendelman began studying piano at the age of six, in Tel Aviv, in his native Israel. Moving to the United States in 1984, at the age of 12, he went on to win several awards, and has worked with artists including Harry Allen, Teddy Edwards, Warren Vache, and Houston Person.

ADVERTISEMENT
"Wrap Yourself In Dreams" starts the CD, with a galloping intro that Hendelman reins in to become a satisfying bluesy cadence. Clarinet legend Benny Goodman originally put his stamp on "Soft Winds"; here, it becomes imprinted with Nash's easygoing brush work, supporting Hendelman's relaxed groove. Towards the end, Panascia sets in, gracefully exchange bars with the drummer.

Hendelman's two originals are also noteworthy. "Israeli Waltz," his ode to his homeland, captures the wildness of the north country, while "Babushka" (grandmother) evokes the memory of his Polish immigrant grandmother with a stately old world lilt.

The real show-stopper, though, is "BQE," Makoto Ozone's ode to the Queens Expressway in New York. Hendelman's version is truly like a train hurtling down the tracks, with Nash at the controls, his drumsticks providing power as he steers it to the final stop.

From Lois P Jones's poem included in the liner notes, Hendelman invites: "Come with me, from stone to star, it isn't far. The sun will rise in a golden note and blow it all away." Destinations blew me away, note by note.

Wrap Your Troubles in Dreams; Passarim; Soft Winds; Le Tombeau de Couperin; My Song; You Stepped Out of a Dream; Israeli Waltz; Anthropology; Babushka; On the Street Where You Live; BQE; Valentine.