Skogen: Despairs Had Governed Me Too Long 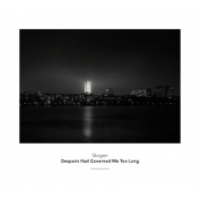 With their previous two Another Timbre releases, Ist Gefallen In Den Schnee (2012) and Rows (2013), Magnus Granberg's large international ensemble Skogen established themselves as purveyors of exquisitely-played spacious music, that transcends the composition-improvisation border and makes beguilingly beautiful listening. On the 2012 album, a nine-member version of the group played a one-hour-plus rendition of Granberg's title piece. On Rows, an eight-member version—substituting Ko Ishikawa on sho for Leo Svensson Sander on cello and John Eriksson on vibraphone—played nine shorter pieces composed by Anders Dahl.

For Despairs Had Governed Me Too Long, which was studio-recorded in Stockholm in November 2012, at the same session as Rows, the group swells to a ten-piece—retaining Ishikawa while seeing the return of Sander and Eriksson. Once again they play an extended Granberg composition, the fifty-six minute title piece. As with "Ist Gefallen In Den Schnee," Granberg cites the influence of a classical piece on his composition—this time, a song by 17th century English composer John Dowland. While that is certainly the source of the title "Despairs Had Governed Me Too Long," beyond that listeners need not dwell on the connection; the music here is more likely to cause them to seek out other Skogen recordings than some Dowland songs...

As before, Skogen displays the characteristics that have brought it acclaim: despite the size of the ensemble, its members do not get in each other's way and its music never sounds over-busy or cluttered; the instrumentation achieves a good balance between conventional chamber instruments and others, acoustic and electronic, affording them equal value and allowing them to complement each other; every sound made by every player is clearly audible, thanks also to the clarity of the recording.

If its title suggests that this composition could be melancholy or depressing, nothing could be further from the truth. In fact, it has an over-riding sense of peace and tranquility that is relaxing and uplifting in equal measure. Despairs Had Governed Me Too Long completes an impressive hat-trick for Skogen on Another Timbre.

Title: Despairs Had Governed Me Too Long | Year Released: 2014 | Record Label: Another Timbre