By WOODROW WILKINS
March 21, 2009
Sign in to view read count 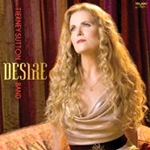 The soft flute that is Tierney Sutton's voice slowly brings the audience in to "It's Only a Paper Moon," the opening track to Desire, an 11-song collection of titles that expresses people's fixation on fame and fortune.

The Grammy-nominated Tierney Sutton band defies mainstream practices; many vocalists often surround themselves with a seemingly constant rotation of talent, in contrast Sutton is accompanied by the same musicians: pianist Christian Jacobs, bassists Trey Henry and Kevin Axt, and drummer Ray Brinker. Their decade-long association makes them not only tightly-knit but also perfect complements to one another.

Mixed in with the opening song's lyrics, Sutton recites lines from the sacred book of the Baha'i faith, speaking of the ills of material desire. Jacobs' solo, supported by Henry and Brinker, is the song's musical high point, and the vocalist gives them plenty of room to explore before she comes back in.

Sutton and the band deliver a haunting rendition of "Fever," the song starting softly, a drum roll signaling the more active music element. It is is one of three tracks that features both bassists. Sutton is sassy in her delivery of the "Romeo and Juliet" verse, highlighted by an all-stop from the musicians. The intensity ratchets up even further on the next verse before going soft again.

Axt opens "It's All Right With Me," softly backed by Jacobs and Brinker. Sutton injects some spunk in the way she pronounces the words, she then turns it over to the band. Jacobs is in top form during his solo, but Axt and Brinker are nearly equally engaged.

Brinker shows off on the toms to open "Love Me or Leave Me." Bass and piano come up before Sutton joins; her inflections during certain phrases spicing things up. The pace then shifts during the middle break, it swings with the piano out front; then it becomes more brooding while Brinker stretches out and as suddenly as it changed before, the song shifts back to the main theme.

Sutton's use of religious messages against the evils of desire could be seen as a negative by some; however, the arrangements and the pitch-perfect delivery is how this collection should be measured. In that regard, Desire represents the Tierney Sutton Band at its best.

Track Listing: It's Only a Paper Moon; My Heart Belongs To Daddy; Long Daddy Green; Fever; It's All Right With Me; Then I'll Be Tired of You; Cry Me a River; Love Me or Leave Me; Heart's Desire; Whatever Lola Wants; Skylark.