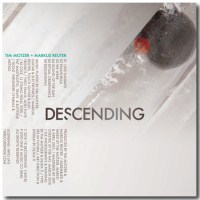 Sometimes, with albums built from file-shared overdubs, the sum of the parts can be greater than the whole. Happily the reverse is very much the case with this engaging collaboration between guitarists Tim Motzer and Markus Reuter.

The core of this elegantly dreamy music was recorded at a concert given by the duo in 2008, with guest contributions added over the following couple of years. As a result, the original improvisations have been weathered and abraded with opulent washes of extra texture and rich layers of timbral depth.

Though many of the sounds swirl about in hazy, amorphous drifts, there's a world of startling detail to be found and admired as lines constantly connect and cross over each other. This can be an occasionally dense and foreboding kind of place, as on the 12 minute "Emanuella," where an acetylene guitar solo burns through the complex network of accrued notes.

"1200 Sundays" is a drop-dead gorgeous distillation of sunny, summery times. "We Were" creates a pensive, expectant mood that's both quiet yet packed with impending drama with Hirlinger's cymbal work, cleverly building the tension. Elements of the absorbing "Ritual Observance" echo some of the monumental abstractions which Reuter regularly creates in Centrozoon.

On their own, any one of six tracks which make up the album would be beguiling enough. Taken as a whole, they become something that is hugely cinematic in scope, and deeply immersive, combining to form a cavernous, ornately beautiful place in which to lose yourself inside.

1200 Sundays; Emanuella; We Were; Sound of the Sun; Ritual Observance; Descending.