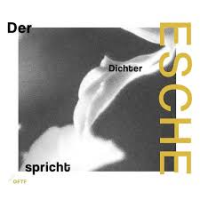 On its sophomore release, Swiss trio Esche continues its search for ways to fuse classical chamber music with possibilities for improvisation, and even swing, that stem from the jazz tradition. The title of the record, Der Dichter Spricht ("The Poet Speaks"), does not seem an intentional reference to the Schumann piece of the same name, although there is a certain strain of romanticism to be found in the group's music, lending a decidedly lyrical touch to pieces that otherwise often venture into abstract terrain.

The trio is comprised of sister-brother tandem Laura and Luzius Schuler (she on violin, he on piano) and bassist Lisa Hoppe, and each of the album's nine tracks was composed by one of the three. It is a credit to the group's unity of vision that the pieces have a common feel, even though they are rather distinct in shape and character. What unifies them is their careful, measured delicacy, with occasional oblique elements that gesture beyond the pieces toward something a bit more unconstrained. A perfect example is the album's opener and title track; a piece that would otherwise be a conventional classical reverie, with Luzius Schuler's calm pianistic reflections at its foundation, becomes a vehicle for the freer explorations of Laura Schuler and Hoppe, who alternate in sketching the melody of the piece and in exploring moments of purer abstraction. The result is both beautiful and slightly unsettling at the same time, with an undetermined openness that is quite compelling.

Other pieces similarly maintain this space between definition and indeterminacy. "Trotz" allows Hoppe to take the lead in articulating the melody while the Schulers provide commentary, sometimes directly and sometimes atonally, with Luzius Schuler's assorted workings inside the piano an especially disquieting effect. "Orkanum" is even more mysterious and forceful, with a gradual crescendo of intensity leavened by only subtle hints of melody. Darkest of all is the suitably titled "Odyssee," where composed sections alternate with freer flights, Laura Schuler's upper-range flurries leading the way on a fascinating journey.

There's a lot of close listening by all three musicians, as their ability to find new departures within the contours of each composition hinges on their sympathetic responses to the others' decisions. This is demonstrated especially well on "Slow Bus to China," which has a substantial, free-flowing dialogue among the players during its middle section.

While the group's classical inspirations are more obvious than its jazz influences, the latter do become apparent on occasion. "Om-Har" offers a winsome, folk-like melody, endearing in its simplicity, with a subtle groove emerging midway through as Luzius Schuler's and Hoppe's ostinato phrasing gets things moving. Even more rhythmic is "Fischer," a jaunty piece with ample motion and an infectious pulse, while "Shatterhand" provides an upbeat slice of Appalachian folk animated by Hoppe's swinging bass line and Luzius Schuler's sprightly solo.

Esche proves itself to be a dedicated and accomplished collective on Der Dichter Spricht, and it will be worth seeking out future offerings from this imaginative trio.