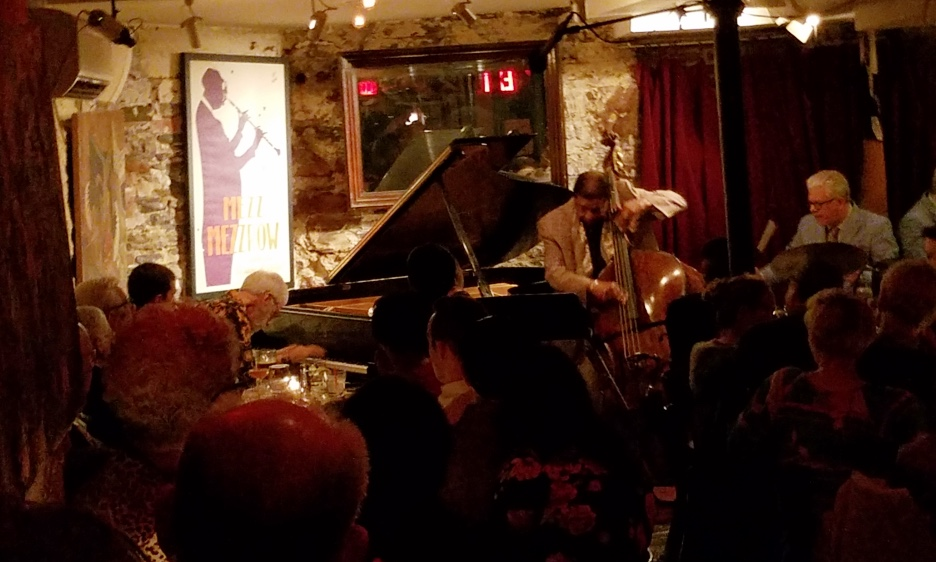 It was cramped on Cinco de Mayo in Mezzrow. Real cramped. Just as it should be for the last night of Denny Zeitlin's rare, four night residency. A West Coast resident, Zeitlin doesn't get out this way much, so when he does, the people respond, listen, and marvel.

Denny Zeitlin may not be a name that rolls off the tongue, but whether novice or dedicated follower of the man's fifty year discography, the music, and the way his hands roam the 88's seemingly with minds of their own; manipulating the harmonics, throwing light into the corners of favored classics and originals; baring the musical construct and then building upon them, winds deliciously around your head long after the taxi to the train.

After nearly twenty years co-creating with Zeitlin a music that resonates, the joy of playing together shines from the faces of both deep toned bassist Buster Williams and time inventing drummer Matt Wilson as Zeitlin kicks off Cole Porter's "All Of You" turning phrases and upending riffs with an exuberant calculus and abandon. A Billy Strayhorn samba follows, the pianist seeking, and finding, melodic warmth in the down groove of his rhythm section to the point that one could easily visualize the ladies dancing in silk summer skirts.

But there's no room to dance in Mezzrow. So you listen and observe three seasoned brothers make each musical moment enticingly real, something special to hold onto and you know you're uniquely fortunate to be in the same room. Williams is the stolid, stoic center of "You, The Night, and The Music." Two Sammy Cahn tunes, "I Should Care" and "As Long As There's Music" are bouncing, triumphant rhapsodies with Zeitlin sprinting over the keys and a bass solo that turns the room on its head leading to several shorter, expressive solos from each player. Miles' early "Walking" was a deep, overt blues done abstractly, the trio working various themes into the whole with percussive flair. An unapologetic post-bop reading of Wayne Shorter's "ESP" wrapped the first set.

With a flurry of harp like notes, a ringing ride cymbal and pizzicato bass, "The Night Has A Thousand Eyes" opens set two with some pure, exploratory dissonance. Each player finding and holding his own space no matter where inspiration flows. Sonny Rollins' "Oleo" and Duke Ellington's "Warm Valley" only enhance one of those musical nights that only happens in New York. When the city itself actually stops to listen.