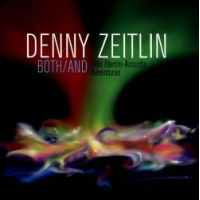 Pianist Denny Zeitlin has the distinction—among many others—of having written one of the loveliest of love songs: "Love Theme From Invasion of the Bodysnatchers." The tune can be heard in its unadorned beauty on Zeitlin's Precipice (Sunnyside Records, 2010), the recording of an extraordinarily beautiful and adventurous solo concert. The original version of the tune, from the soundtrack of the 1978 movie, Invasion of the Bodysnatchers (1978)—a masterful remake of the classic 1954 science fiction film—was Zeitlin's lone effort at writing for film. Hired originally to do a "jazz" score, Zeitlin found it necessary—when plans changed—to convince the powers-that-be that he was indeed capable of writing music for symphony orchestra and electronics—the then-new-on-the scene synthesizers.

Zeitlin had experience with synthesizers. His Expansion (Arch Records, 1973) and Syzygy (Arch Records, 1977) had prepared the pianist for the electronics work. His preparation for working with a symphony orchestra? Essentially non-existent, until the opportunity presented itself with the soundtrack, which turned out to be a rousing success, a perfect accompaniment to one of the great sci-fi movies of all time.

But it was an enormous effort. Working with the cumbersome synthesizers of the day and directing a symphony orchestra had made it necessary for Dr. Denny Zeitlin to put another of his life's passions, his psychiatric practice, on hold for a time; so, in the wake of this successful foray, pianist Denny Zeitlin took a thirty-plus year hiatus from electronic and symphonic music and immersed himself mostly piano trio and solo work, acoustic style, offering up the previously-mentioned Precipice, Labyrinth (Sunnyside Records, (2011), and Wherever You Are: Midnight Moods for Solo Piano (Sunnyside Records, 2012), for a marvelous recent track record—totally acoustic—that makes Both/And, which is subtitled Solo Electro-Acoustic Adventures, such a surprise.

Zeitlin says he always wanted to be an orchestra. The new-millennial technological advances in the equipment for electronic music creation make that possible, on a CD that blends electric, electro-symphonic and acoustic sounds in fresh ways.

If the opener is a minor symphony, the thirteen minute "Dystopian Uprising" is a moody symphony. A masterpiece that evokes the unsettled mood of a world gone terribly wrong. Atmospheric and gloomy, full of impending dread, Zeitlin's acoustic piano backed by "strings" has the feeling of a soundtrack more perfect, perhaps, than even his "Bodysnatchers" work—a complex piece of music all the more beautiful for its mostly-restrained-but-vivid exploration of a darkening existence.

If "Dystopian Uprising" is a moody symphony, the five part,twenty-three minute "Monk-y Business Revisited" is a major one. Zeitlin has expressed—after thirty-plus years of working in the acoustic mode—some dissatisfaction with the timbrel limitations of he solo piano and piano trio formats. With synthesizer/electronics, the timbrel possibilities are pretty much endless, and Zeitlin exploits those possibilities very deftly, whether with the spacey harmonic glow on "Intro and Main Theme" of "Dystopian Uprisings," or the eerie electric warble of the opening of "Into the Funk;" or the same section's near-authentic—in terms of reproducing the acoustic sounds of that instrumentation—string and percussion work.

Electronics have been creeping into the world of jazz music bit-by-bit. Denny Zeitlin embraces the format and marries it to the acoustic side with a rare finesse. Both/And, is an extraordinary work of art. A masterpiece? Maybe. Time will tell. Denny Zeitlin is an orchestra, one that uses an acoustic/electronic blend with a master's touch, to transcend even the "timbrel limitations" of the orchestral format, creating his finest and most compelling work.