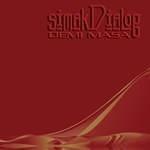 simakDialog's Demi Masa, one of the best releases of 2009, rejuvenates fusion music and takes it to an entirely new level.

The soloists are extraordinarily good on this combination of guitars, electric bass guitar, and keyboards with Indonesian kedang percussion, assisted by percussionist/vocalist Emy Tata, singer Mian Tiara and soundscapist Dave Lumenta—but more on this later.

The remarkable thing about the group's percussion team is how tight and well-integrated it is within simakDialog's sound. It sets up an underpinning closer to a drum kit than standard percussion. The kedang—along with toys and other items—cushion and push the other instruments rather than punctuating the sound, which is more often the case.

Although there are certain similarities to mid-'70s jazz-fusion, simakDialog's unorthodox rhythm section subverts the analogy, and the group shows a greater affinity to some of the more tasteful manifestations of jazz-rock, including Weather Report and Return to Forever. But keyboardist Riza Arshad and guitarist Tohpati Aryo Hutomo (aka Tohpati) have a more interesting pedigree, whether or not the band realizes it. There are marked similarities to bands like British Canterbury bands Hatfield and the North and National Health, especially in simakDialog's use of guitar lines that rely more on invention than flash. The keyboards, in all their analog glory, demonstrate a unique warmth and harmonic integrity. While by no means identical to the work of Hatfield/National Health's Phil Miller and Dave Stewart, there's a similar stress on development of individual voices.

Equally, the group is unafraid to incorporate dissonance. Tohpati, in particular, knows when to throw in bloodcurdling electric clusters as needed to enhance the mood, and Arshad sets up some wonderfully sensitive electric piano accompaniment, as well as being a fine soloist. Bassist Adhitya Pratama knows how to lay a foundation, but sets the band up for solos that have an orientation more aligned with progressive rock than jazz-rock. The compositions are really compositions, and not simply riff generators.

simakDialog has real energy and chops and should go very far. Demi Masa is a distinct improvement over Patahan (MoonJune, 2007), an album that nevertheless proved simakDialog to already be an exceptional group.