Sandeep Das and the Hum Ensemble: Delhi to Damascus

By Hrayr Attarian
September 7, 2020
Sign in to view read count 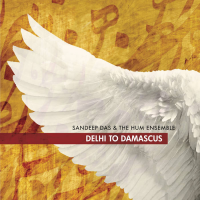 Patna-born and Boston-based tabla virtuoso Sandeep Das has had a long collaboration with cellist Yo-Yo Ma's Silk Road Ensemble. For his debut as a leader, the mesmerizing Delhi to Damascus, he has put together a program of Levantine and South Asian tunes. The group, which includes Das and three colleagues, is called the HUM Ensemble and it explores themes and motifs common between the two eastern traditions.

Opening with a lyrical solo from oudist Kinan Adnawi, "Parvaaz-e Noor: Flight of Light" launches the album with dramatic poetry. Das' resonant percussion percolates as sarangi player Suhail Yusuf Khan performs a melancholic melody which simmers passionately within the undulating refrains. Khan and Adnawi engage in an intimate instrumental dialogue on the hypnotic "Virah: The Longing." Sitarist Rajib Karmakar and Das add to the tense cinematic backdrop of this sublime and meandering song. In addition to his skills on the sarangi, Khan demonstrates his haunting and expressive vocals.

Das and collaborators not only showcase cadence and tonal similarities between Arabic and Indian music but also emotive and contextual ones. The recording is replete with quarter tones, which all three string instruments are able to produce, and Das's complex rhythmic modes. In addition, they brim with a unique spirituality common to both the Middle East and the Indian Subcontinent. "Shiva-Shakti" for instance features a hypnotic and ethereal duet between Karmakar and Das which evolves with ever increasing tempo to a breathtakingly agile and mystical exercise.

The title track alternates Khan and Adnawi's yearning phrases with Karmakar's shimmering notes thus building a joyful and pastoral atmosphere. Das' lithe and acrobatic percussion creates textured polyrhythms which buoy the quartet's muscular and lilting collective performance. In contrast, the short yet poignant "Aafreen" is a meditative elegy which highlights Khan's mastery over his instrument with complementary support from his bandmates. Despite different moods, both pieces are definitely eastern in their intricacy and emotional sensibilities.

With Delhi to Damascus Das and the HUM ensemble have created a successful fusion of two cultural heritages. Aided by the incredible talent and brilliance of the individual artists, this enchanting release is a superb tribute to the unifying nature of music.