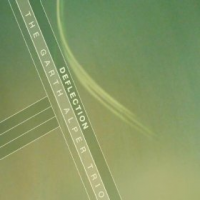 The third album from The Garth Alper Trio, Deflection delivers a selection of eleven original and mostly soft-textured compositions fitting quite nicely in a colorful landscape of modern light jazz. Pianist and educator at the University of Louisiana at Lafayette, Dr. Garth Alper anchors a well-read traditional piano trio consisting of fellow educators Dr. Bob Nash on bass and Troy Breaux, Director of Percussion Studies at UL, on drums. Together for some time, the academicians know each other well and it shows in their tight, single unit-like performance that makes the music on Deflection so accessible and easy to enjoy.

Having established the caliber of the musicianship here, this recording is not so much about Alper and crew as it is about the music attesting to the leader's talents as a composer. The beginning "One to Five" opens the session with a slight Latin flair followed by the fluid "Rising Tide" featuring the pianist and Nash on intricate harmonic movements. "I Got Nothin'" is inappropriately titled for Alper certainly has something here; complete with a call and response structure, the piece is one of the highlights of the disc.

Inspired by the leader's involvement with the Chinese system of slow meditative physical exercise commonly known as Tai Chi, the title track reveals a soft beautiful ballad conveying a relaxing stress deflecting mood capturing the warmest spot of the album. In contrast, "Five to One" comes across as the perkiest up tempo piece of the set featuring drummer Breaux on a solid aggressive solo defining the tune and making this one a showpiece number.

Demonstrating a range in styles, Alper pens a funk vamp introduction to his "A Little Later" that journeys on the edge of something more progressive and a departure from the main repertoire of primarily light material. The music comes to a close on a dynamite piece of music penned in 1980 and not recorded until now. "Meteorology" seems to be the perfect climax for it features brisk solos from all members of the group in a swan song that gathers no clouds and shines brightly on a stellar session of music.

Featuring assertive solos from each member of The Garth Alper Trio throughout the album, a quality selection of fresh new charts and an enticing approach to the music, Deflection may just be one of those hidden musical treasures waiting to be discovered.

One to Five; Rising Tide; I Got Nothin'; Deflection; Still Waters; Go Spell; Five to One; Cirrus; A Little Later; Will o' the Wisp; Meteorology.

About The Garth Alper Trio