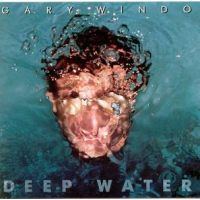 Celebrated British saxophonist Gary Windo had an imposing musical presence as his untimely passing in 1992 left a huge void on the international jazz and rock scenes. He could seemingly gash titanium into shards via his colossal sound, linked with shimmering vibrato phrasings and serrated lines. During the 70s he was very much in- demand and a key collaborator with storied 1970s Brit jazz icons such as jazz artist Graham Bond, progressive rock luminary Robert Wyatt and was a member of pianist Keith Tippett's bold 50-piece orchestra Centipede, amid his work with Pink Floyd drummer Nick Mason and other notables. Windo was a renaissance man, who also worked with rock bands NRBQ and The Psychedelic Furs. Moreover, his legacy includes appearances on a horde of pivotal prog rock and jazz albums.

Deep Water is one of three rare albums issued by UK-based, Gonzo Multimedia. The other releases are Steam Radio Tapes which was recorded in 1976 at Mason's studio, featuring Wyatt and a cast of prog rock and jazz artists and the multifaceted rock extravaganza Dogface, issued in 1982.

Windo's 1987 production Deep Water, boasts a quirky progressive and thrash rock foundation, while also accentuating Windo's sense of humor. He led this band from 1984—1988. In addition, this production contains a touch of jazz fusion and various passages where the leader skirts avant-garde territory with his resonating and stormy breakouts, coupled with an angular attack and overlaid choruses. As the electrifying work of guitarist Knox Chandler is an added bonus.

Chandler's spaced-out crunch chords and stinging lines are a solid foil for Windo's imploding guerilla tactics. Toss in a few off-center deviations, coupled with the rhythm section's firm and punchy support, the resonating recording attributes enhance the band's aura, while engendering a bit of depth to its output. With tidbits of free-jazz, skronk and popping beats, the group also injects psychedelia into the festivities. Otherwise, Windo alternates his gritty lines on "Don't Bite Too Hard (Your Teeth Are Too Sharp)" with hybrid spoken word and singing. His vocals are a bit thin, although he simply melds a little wit and whimsy into the proceedings. Here, the band gels to a conventional rock pulse, anchored by bassist Jack Robinson's steely notes.

On "Ginkie," Windo executes a multi-layered World Saxophone Quartet type vamp, yet on "Ghosts," the musicians tender a foot-stomping straight-four motif, shaded by the leader's electronically mutated vocals and fused with his sizzling sax parts. And "Breakfast in Bed" presents a darkly hued, massive wall of sound, enhanced by Windo's menacing treatments. Thus, it's safe to say that Windo's flexibility and chameleon-like musical demeanor equates to a sensibility that the world was his oyster. Who knows what additional and largely, influential impact he would have borne if his life was not cut short at 51.