By GLENN ASTARITA
May 8, 2013
Sign in to view read count
Track review of "Whale Watch" 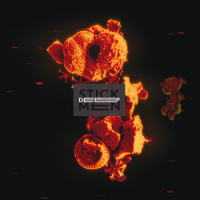 Deep is amassed with sonorous bass parts and the frontline's sinewy and effects-laced phrasings amid booming choruses, as the trio strategically incorporates odd-metered beats into its Herculean gait. The final and lengthiest piece on the album is "Whale Watch." Here, they navigate through a labyrinth of orchestrations propagating ominous intentions, yet temper the fiery onslaught with calming metrics. And the musicians raise the pitch by launching into a weighty and shifting King Crimson-like vibe where Levin and Reuter employ various distortion techniques and monster bass lines atop Mastelotto's resonating fills and hammering backbeats.

With stormy cadenzas and gradually climactic momentum, the band sails through the high seas via a massive wave of sound while extracting numerous hues from their respective instruments. The Stick Men eventually wind matters down a bit, and soar onward with fuzz-toned chord voicings and meticulously designed single note riffs. Overall, they yield an ungodly musical environment, spiced with generously proportioned, and at times, awe-inspiring progressions—boosted with the exhaustive dominion of a goliath on the loose.