The Man Who Laughs: Deep Song 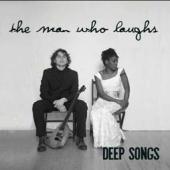 On Deep Song, London based singer Fumi Okiji and looped up guitarist Stefano Kalonaris—recording under the auspices of the experimentally inclined, but historically literate, musicians' collective F-IRE—offer a noir-ish, digital-age spin on jazz standards and the Great American Songbook. Okiji has explored similar material with the Portrait Bellevue trio featuring cellist Benjy Davis and pianist Zac Gvirtzman, and Kalonaris has done so via vintage jazz ensembles on the cabaret circuit.

Deep Song takes 10 popular and jazz standards—from "Sweet Georgia Brown" and "Darn That Dream" to Duke Ellington's "Sophisticated Lady" and Charles Mingus' "Eclipse"—and repositions them in 2010, where Okiji's rich, relatively straightforward, contralto readings are accompanied by Kalonaris' sampled and effects-filtered guitar. The result is a divertissement rather than a revolution, but it's surprisingly compelling, a modern take on jazz noir which successfully inhabits the style's signature ambiance of bittersweet nocturnal heartache and emotional and temporal dislocation. "Love is a barren land of loneliness," sings Okiji on the title track, over Kalonaris' ghostly, tubular bells-like effects.

Most of the arrangements are straightforward, but two are more ambitious. On "Sweet Georgia Brown," Okiji is accompanied by extended bata drum samples taken from Yoruba Bata Drums: Elewe Music And Dance (Smithsonian Folkways, 1980). It sounds like an unlikely combination, but it works wonderfully. On "Yesterdays," the lengthy introduction is taken from "How I Got In The Penitentiary," an interview with prison farm inmate W.D. Stewart on Negro Prison Blues And Songs, recorded by Alan Lomax in 1956 (reissued on Collectables Records, 2006). Stewart's preamble about the events which landed him in jail give the song new resonance. The disc closes with the anti-lynching classic, "Strange Fruit," the song which confirmed Billie Holiday's iconic status following her 1939 performances at New York's left-leaning Café Society nightclub.

The group's name, The Man Who Laughs, is taken from a 1928 movie, and Deep Song's source material ranges back more than half a century, but the new twists here are fresh enough.

Sophisticated Lady; Sweet Georgia Brown; Deep Song; Darn That Dream; Eclipse; Yesterdays; Duke Ellington's Sound Of Love; I Wonder Where Our Love Has Gone; I Must Have That Man; Strange Fruit.

About The Man Who Laughs