By DAN BILAWSKY
January 5, 2017
Sign in to view read count 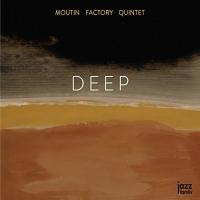 Deep. So very, very, deep. Rarely does a single four-letter word so eloquently and accurately capture the spirit of an album. Everything from the grooves to the compositions to the thought content embedded in each musician's statements can be summed up by that simple-yet-complex title.

The Moutin brothers—bassist Francois and drummer Louis—formed the Moutin Factory Quintet back in 2013, expanding on their already established musical ties while giving further credence to the notion that twins share a special bond and language. The band's debut—Lucky People (Plus Loin, 2013)—was engaging, full of strong work and showing great potential; Deep is that potential fulfilled. Everything is in its right place here. Sparks fly and instruments alternately sting and sigh, as swift action figures into this exquisitely-shaped work of thinking men without ever overextending its influence.

The pieces that tend to carry the day in this set are not the most driven. Instead, it's "Love Stream," "A Soothing Thrill," and "In The Name Of Love"—songs that play light against darkness, creating audible shadow worlds in the process—that remain fixed in the brain. Playful presentations like "Fat's Medley," driven numbers like "Shift," and toothier offerings like "Exploded View," "Hell's Kitchen," and "Bliss" provide welcome thrills—Manu Codjia's searing guitar work, band newcomer Jean-Michel Pilc's filtering of his signature wry intelligence through the piano, saxophonist Christophe Monniot's flights above the fray, tight and pressurized grooves crafted by the co-leaders—but the more reflective fare outdoes those performances through expressions of the heart that run incredibly wide and astonishingly...deep. There's that word again, permanently orbiting this powerful music. You simply can't escape it here.