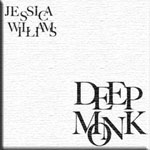 Do we really need another tribute to Thelonious Sphere Monk? Everybody who is anybody in the jazz game has put a Monk song on an album. Some have been so bold as to dedicate an entire album to the odd and angular songs full of playful dissonance and unexpected angles.

Not easy tunes to play, they say. But the jazz family patriarch, Ellis Marsalis, does a masterful job of it on An Open Letter to Thelonious (ELM Music, 2008), employing, as Monk did almost exclusively in the masterful twilight years of his career at Columbia Records, a quartet fronted by a saxophone.

Pianist Jessica Williams, with Deep Monk, goes another route: playing Monk compositions—and tunes that Thelonious made his own: "Easy Street," "April in Paris," "Ghost of a Chance"—solo, a mode that Monk didn't go to often enough.

Williams' jazz world profile isn't where it should be, and her decision to forgo the major label game and sell only from her own website—a la ArtistShare—might contribute to a lower recognition factor. But listening to Tatum's Ultimatum (Red and Blue Recordings, 2008) or Songs for a New Century Origin Records, 2008) makes clear that Williams ranks with Keith Jarrett, or beyond.

Deep Monk does the same.

Monk himself closed his excellent and somewhat overlooked live album, Misterioso (Riverside Records, 1958), with its title tune, and Williams closed her own Live at Yoshi's, Volume One (MaxJazz, 2004) with it. She opens Deep Monk with that same, familiar melody, on a take that gets deep into the pensive beauty of Monk's mind.

Throughout the set—on classic, beautiful gems like "Crepuscule With Nellie," "Ugly Beauty," and "Blues Five Spot"—Williams explores the music of Monk with respect, alongside her own small flourishes and moments of unalloyed joy. She seems a perfect soul mate for that giant of jazz.

So, do we really need another Monk tribute? You're damned right we do: Deep Monk.