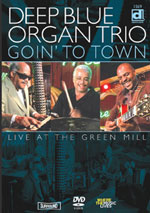 Although Philadelphia is the acknowledged capitol of jazz organ, Chicago South-siders with long memories will make a compelling case for the prominent role of the B-3 at some of the Windy City's most historic blowing sessions. There's no shortage of stories about Stitt and Ammons dueling at McKie's Show Lounge on Cottage Grove at 63rd Street in the company of some of the "baddest" players—Don Patterson, Eddie Buster, Jack McDuff, Leon Spencer, Odell Brown, Hank Marr, even the venerable Milt Buckner. Enter the new main Midwesterner on the instrument, Chris Foreman, a blind prodigy who for over twenty years has shared a telepathic connection with drummer Greg Rockingham, leader of Deep Blue, the organ trio that includes guitarist Bobby Broom, a transplanted New Yorker whose credits include gigs with Sonny Rollins and Miles Davis.

The music has moved to a club on the North Side, the Green Mill, where the crowd is youthful, white, and obviously studious in the attention it brings to the blues. And this is an ensemble that merits serious, attentive listening, practically redefining the sound of the conventional organ trio. With this group democracy rules, as Broom's lyrical guitar solos are spotlighted no less than Foreman's spirited keyboard virtuosity. The ensemble sound, moreover, stresses balance along with light and varied textures. Just as Broom eschews octaves and chords in his solos, favoring lean and economical single-note lines, Foreman avoids thick chords while minimizing the use of draw-bars, Leslie effects, and hackneyed Hammond devices like drone tones.

It's this attention to textures and dynamics that enables the group to do commendable justice by Gilbert's/Jobim's delicate "Once I Loved" as well as to give adequate breathing room to a clever tune with a Monkish melody—Broom's "No Hype Blues." At the same time, this is a single-minded unit that can cook, and turn up the flame at a moment's notice. On the aforementioned Broom blues, Foreman pulls out the stops and momentarily invokes the spirit of Wild Bill Davis at his most untamed, only to return to the subtle and subdued melodic line of the out chorus without requiring so much as an extra beat to cool down.

Rockingham deserves the lion's share of the credit not only for making Foreman the man on the scene and assembling a mean yet gentle music machine but for his percussion mastery. I can recall drummers trying to "keep up" with Groove Holmes' torrid tempos or endeavoring mightily to "hold back" Jimmy Smith's accelerating pace. But perhaps not since Billy James has a B-3 drummer locked into and maintained a groove as tight and secure yet relaxed as Rockingham's—even on a blistering up-tempo tune like "The Way You Look Tonight."

The DVD will no doubt be a boon for B-3 players hungry for tips. (Yes, Foreman does appear to rely exclusively on his left hand for those bass lines.) The camera work, despite some patches of excessive double and triple exposures, follows the music, guiding the ear to where the action is. The audio is balanced, clearly defined, and unusually "clean," especially for a B-3 session. In the liner notes, Broom is quoted eloquently on the blues as a Black-American expression, celebrating and validating African-American musical culture and history. Consequently, the video makes it unavoidably discomfiting not to be able to see, especially in a major urban jazz venue, this tradition reflected in terms of a racially diverse audience.

Tracks: Goin' To Town; The Way You Look Tonight; Once I Loved; No Hype Blues; Lou; Can't Hide Love.