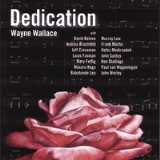 Fascinatin' rhythms are the common denominator on composer/trombonist Wayne Wallace's second album, Dedication, which alludes to the word's definition as "single-minded, tenacious or devoted. In other words, it is a salute to the countless hours of hard work and practice that enable musicians to express themselves and convey the language of jazz.

To underscore his purpose and fend off boredom on the part of the listener, Wallace employs groups of various shapes and sizes, from quartet to mini-big band, and provides them with a sundry menu that includes straight-ahead themes, Afro-jazz, Latin charmers, a ballad (McCoy Tyner's "Some Day ), a jazz waltz and even a tone poem (John Coltrane's "Spiritual ).

Besides playing trombone and leading the ensembles, Wallace wrote six of the album's ten selections (including the last three) and arranged all of them. Coltrane also wrote the sunny "Mr. Day, while flutist Andrea Brachfeld contributed the lyrical waltz, "Pat's Song. Wallace is an imaginative composer with a keen ear for melody and rhythm, and his themes are consistently enticing, especially the Latin-inspired "Dedication, the gently swaying bossa "Nena, the bop-ish blues "Yours Truly and modal swinger "R.S.V.P.

These are by and large San Francisco Bay-area musicians, most of whose names may be new to the listener, but one need have no qualms about their talent. They can play. Among the soloists, Mary Fettig, once a member of the Stan Kenton Orchestra, is a standout on soprano sax ("Mr. Day ), tenor ("Yours Truly ) and bass clarinet ("Nina, "Benin ), as are trombonist Jeff Cresman, trumpeter John Worley and pianist Murray Low whenever their names are called. The rhythm section, reinforced by percussionists Babatunde Lea and John Santos, is strong and resilient. Coltrane's "Spiritual, performed by a quartet featuring pianist Low, bass clarinetist Fettig, shakuhachi player Masaru Koga and ney player Hafez Modirzadeh, is sublimely spellbinding.

Wallace, we're told, was influenced by Ellington, a stimulus that is readily apparent even though subtly realized. This is the direction in which Ellington plausibly may have gone with his music. It's earnestly contemporary yet solidly rooted in the tradition. Bravo to Wallace for his dedication and that of his colleagues.