By GLENN ASTARITA
September 19, 2018
Sign in to view read count 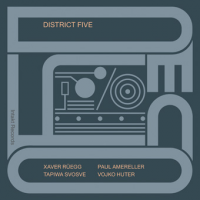 Without getting too far into the initial spin of this record, it became apparent that the musicians of District 5 emit impressions of youth, armed with a penchant for adventure and unbridled momentum. Soon afterwards, the assumption was confirmed: the Swiss artists are—via information gleaned from a press pitch on Intakt Records website—in their twenties. Heartiness, a willingness to take chances and veer towards an uncommon pathway are attributes that seed the nucleus of the ensemble's operative approach.

The audio mix provides depth, partly due to Huter's use of reverb that imparts an ethereal aura into the big picture. Whether he's comping or soloing with his dark-toned electric phrasings, he casts a silhouette of a given theme amid a distinct layer of sound that is somewhere nearby, but not upfront in the mix. It all makes for an interesting soundscape that goes against the norm.

The quartet generates a soft touch on the misty, and wraithlike "Reminiscence." Although during several passages we find the group navigating through off-centered unison choruses, and unanticipated detours. Yet "Maths" is a piece structured with a melodic guitar ostinato and companion synth line atop Amereller's snappy and reverberating backbeat.

Hopefully, this fine outing will serve as the precursor for a long-lasting union, complete with future endeavors of this ilk and beyond, since their capabilities, chops and vision suggest an open-ended realm of possibilities.