By DAN BILAWSKY
October 7, 2015
Sign in to view read count 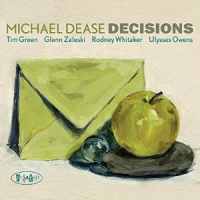 When it comes to decision-making, not everything is black and white or right and wrong. On occasion there are multiple paths that can be seen as the correct choice, and trombonist Michael Dease truly understands that. Dease came to a significant fork in life's road when he found himself in a position to decide whether to remain a first-call New York-based player or move to Michigan. He ultimately chose the latter option and it hasn't hurt him one bit, as his career as an educator at Michigan State University has blossomed and he still makes his presence felt on record and in the jazz community at large. But in truth, either choice probably would've worked out just fine for Dease, as some life decisions can potentially offer multiple outcomes that all prove to be positive in the long run.

That experience can be seen as a parallel to making this album. Dease could've gone in multiple directions here, as there was no prescribed track. In the end, he put together a small group, paved a path that's basically straight down the middle, and split the program between originals and covers, showcasing the lyrical qualities in his playing in various settings. Those happen to have been excellent choices, though the same thing probably could've been said had he gone in any number of other directions. Such is jazz, the art of album-making, and life in general.

Dease kicks off this program with three numbers that basically sum up what he's about: his penchant for swinging scenarios comes through on trombonist Steve Davis' Jazz Messengers-worthy "Grove's Groove," his appreciation for earthier sounds is apparent on the funky "Jason's Gonna Get Ya," and his ability to put his heart into the music surfaces during "Trayvon." Everything that follows can somehow be tied back to those three preferences or properties, but it's not just Dease who's working those lines. The other musicians take cues from Dease, amplifying his personality in the process. Drummer Ulysses Owens, Jr. and bassist Rodney Whitaker deliver swing foundations in various shapes, forms, and gears; pianist Glenn Zaleski covers a wide range of emotions in his work, delivering bluesy banter, Ellington-esque swaths of color, comforting chordal gestures, and guidepost comping; and saxophonist Tim Green adds another layer of complexity to the mix when he appears, giving his two cents as a soloist, bringing greater energy to the music, and joining forces with Dease to add weight to the heads.

There's a good deal of stability and uniformity in the direction(s) that Dease takes, but said consistency never has a negative impact on the way this album is received. While certain rhythmic and stylistic traits are endemic to many of his songs, Dease doesn't compose or arrange from a mold. Each song speaks with a different voice and nary a bad decision can be observed here.

Grove's Groove; Jason's Gonna Get Ya; Trayvon; Gorgeous Gwen; Decisions; Right Place Wrong Time; Everything Must Change; Three And One; You're My Everything; The Big D.