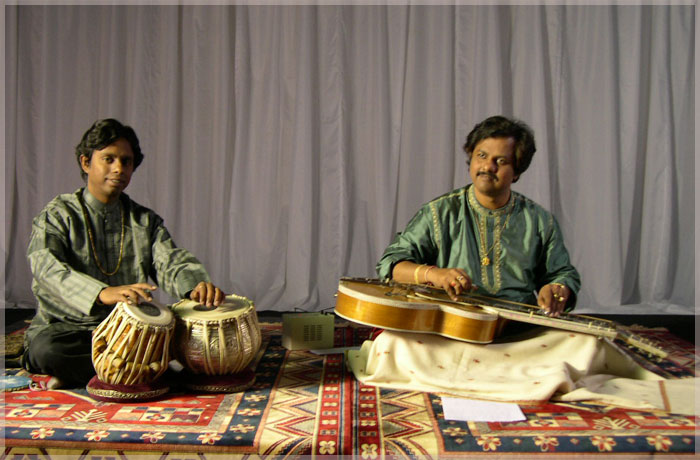 The intimate house concert setting of Streamside Concerts was a perfect way to experience the playing of the great Hindustani slide guitarist Debashish Bhattacharya. Accompanied by his brother Subhasis on tabla, the pair relied upon the iTablaPro application in place of the traditional tanpura (drone) instrument. Bhattacharya demonstrated the software as he was tuning up: the name sounds like some kind of joke, but it's actually a real piece of software, and apparently quite respected as a practice tool. He opened the concert with a short talk about the India International Guitar Festival he has founded (the first one took place in January, 2015). The festival is intended as a learning and career opportunity for young musicians, a goal very much in line with the non-profit music school he also runs. Its funding is the goal of this tour.

The first set was devoted to a mesmerizing half-hour long performance of the raga Rag Megh, which means "clouds." Bhattacharya thought it suited the extremely rainy weather the Southeast has been experiencing (there has been considerable flooding, although not in the immediate vicinity). It is a raga that is traditionally performed during the rainy (monsoon) season, and is considered an evening raga, which made it doubly appropriate for the occasion. The performance followed the classic structure: an alap introduction for the guitar alone, a free exploration of the raga; a jor, which begins to develop a pulse; followed by the jhala, in which the tabla enter and establish the regular rhythmic cycle called a tala. The final ten minutes were a fast second jhala, building to an exciting intricate unison conclusion between tabla and guitar. Bhattacharya's facility with a slide is absolutely astonishing: it really has to be seen to be believed. Traditional Indian stringed instruments like the sitar achieve microtonal note ornaments by using string bending. His slide technique does the same thing by way of horizontal movement on the strings—but even at high speed there is no obvious sliding sound between notes (except occasionally when he uses it for effect), which he accomplishes by very dexterously muting the strings. The performers took a break here, allowing both performers and audience to return to the real world after the long excursion.

During the intermission Bhattacharya spoke about the unusual guitars he designed and plays. His main guitar has a top made from American spruce and a body made from Indian red cedar. It is truly hand made: the shop has no power tools. So all of the woodwork and metalwork was done using traditional hand tools. Asked about a photo showing him with a modified Gibson archtop guitar, he replied that it was a recent addition, a gift that was created by his guru, pioneer of Indian slide-guitar Brij Bhushan Kabra. It started out as a 1956 Gibson Super 400. The neck is only strong enough to support a few additional drone strings, and it has a brighter sound than the guitars he has had built. Speaking about the glass bottleneck slide he was using, he mentioned that he is also a painter, and had used glass jars as a slide before—so he knew he would like the sound.

The second half of the concert featured several shorter pieces, lighter in tone than the introductory raga. The first was in Mixolydian mode, which is commonly used in Western music as well. The performance was notable for some very fast rhythmic picking, a reminder that Bhattacharya's picking technique is just as highly developed as his slide technique. Then he switched to another of his custom instruments, a four-string slide ukulele made from koa wood. He gave an impassioned speech about the need for love in the world, and said the song he was about to play was about the unity of Hindu and Muslim religious traditions. The ukulele is a much smaller instrument than his main guitar, giving it a higher-pitched, more intimate voice.

At this point he called his student Billy Cardine (who had introduced the musicians at the beginning of the evening) up to the stage. Cardine plays Dobro, the American resonator guitar that is also played on the lap with a slide. The distinctive sound, as well as his use of high harmonics (common in Dobro playing) made an effective contrast to the Indian slide guitar, and the two musicians shared a warm camaraderie on stage. Their second tune was a light-hearted selection with something of a Sergio Leone/Spaghetti Western atmosphere. Tabla player Subhasis ended the piece with a bit of konnakkol—vocalised mnemonic syllables used to spell out Indian rhythms—in lieu of a drum solo. One last surprise to conclude a memorable concert.